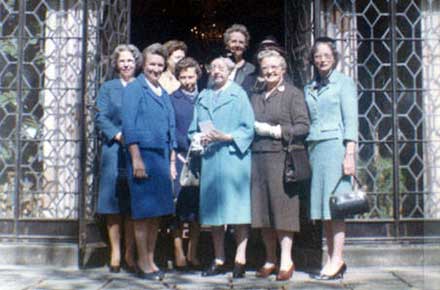 The Clytean Club began in 1897 as The Twelve, a ladies' literary society in Cleveland, Ohio, but it evolved to cover broader topics across history, current events, fiction, and nonfiction. Its name was later changed to The Clytean Club, after a brief time as the Kletian in 1898. “Clytean” was derived from a Greek myth in which Clytie, a water nymph, spent her days staring into the sun (Apollo) in unrequited love, until she was transformed into a flower so that she might continue to face the sun. The club interpreted Clytie's sunny vigil as representative of the constant quest for — and attentiveness to — knowledge, and their symbol is a sunflower, whose face similarly tracks the sun.

Notable members include Fanny Kendel, Alice Hartman Chester, and Eda Gerstacker. Kendel was active in many levels of PTA, including her serving as their National Field Secretary. Chester, a music teacher, was an inductee into the Kiwanis Hall of Fame and acknowledged as a Woman of Distinction by the Medina County YWCA. Gerstacker was the founder of the Rollin M. Gerstacker Foundation and mother of Carl Gerstacker, former chairman of the Dow Chemical Company.

Founded only 100 years after Moses Cleaveland's arrival, the Clytean still meets once per month, usually at a member's house, at which time the group discusses materials it has read, listens to guest speakers, votes on the admittance of new members, and plans its donations to and involvement in various charities. More from the Encyclopedia of Cleveland History.

This collection contains records kept by club officers, programs dating back to the club's founding, correspondences between the Clytean and many other persons, newspapers relating to the club or its members, and other related media.

Rehousing, indexing, partial scanning, and cataloging of this collection were performed by Aquene Kimmel, as part of her volunteer efforts during the summer of 2011 in Special Collections, Cleveland State University Library. Thanks to Lynn Bycko, Bill Barrow, and Joanne Cornelius for their assistance and guidance, and to Lauren Felder for the web design.