BROWSE ALL MATERIALS IN THIS COLLECTION 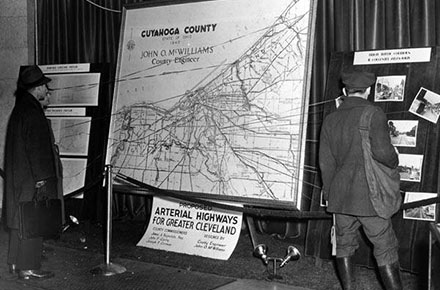 The freeway revolts were a phenomenon that took place across the nation during the 1960’s and 1970’s. The revolts were in response to the many freeway routes that were proposed without due consideration for the neighborhoods that would be demolished, or the people who would be displaced.

In Cleveland, the battle centered around the proposed Clark, Lee, and Heights Freeways. The proposed routes would have partitioned Shaker Heights and Cleveland Heights, costing houses and businesses and affecting a nature preserve, the Shaker Lakes.  The residents of these suburbs banded together, and fought the proposed freeways and the county engineer Albert S. Porter, and Governor James Rhodes to a standstill.

Today, instead of an interchange of two freeways, the Nature Center at Shaker Lakes is used by the residents of both Shaker Heights and Cleveland Heights, to teach environmental education.

We present 17 route location studies, including the proposed routes for the Clark, Lee and Heights freeways that were never built, as well as the original study that started it all in 1955.