The James A. Garfield Collection at Hiram College

James A. Garfield, 20th President of the United States, was born in Orange Township, Cuyahoga County, Ohio on November 19, 1831 to Eliza (Ballou) and Abram Garfield. Abram died of lung congestion following a forest fire when James was 2 years old. He attended the Geauga Seminary for one year, taught some classes there, then advanced to the Western Reserve Eclectic Institute (now Hiram College), working as a janitor to pay his tuition. He also taught classes at the Institute. He finished at the Eclectic in 1854 and went on to Williams College in Massachusetts receiving a Bachelor's degree two years later. He returned to Hiram as a full instructor, became Head of the faculty and later Principal. In November 1858, Garfield married Lucretia Rudolph, daughter of Zeb and Arabella Rudolph. The wedding was in Hiram Village at the Rudolph home.

He studied law in 1859 and, while still Principal at Hiram, was admitted to the Cleveland Bar. The voters of Summit and Portage Counties elected him to the Ohio State Senate shortly thereafter. He helped to recruit the 42nd Ohio Volunteer Infantry Regiment and was its colonel during the Civil War. He was later made Brigadier General for heroic service in Kentucky and West Virginia, and was ultimately transferred to a post as Chief of Staff for the Army of the Cumberland. In 1863 he was elected to the U.S. House of Representatives from Ohio, where he served for 17 years. At this time, he formally left his position as Principal of the Eclectic Institute, but he remained a member of the board of trustees until his death.

Garfield was drafted as the Republican nominee for President of the United States at the Republican National Convention of 1880 and elected President that same year. He had served as President for only four months when a disgruntled office-seeker named Charles Guiteau shot him in the back in Washington, D.C. on July 2, 1881. The ultimate cause of his death was a combination of aneurysm and a form of blood poisoning caused by the presence in his body of the bullet, which doctors were unable to remove. Garfield lingered between life and death for two and a half months, finally dying on September 19, 1881, at the age of 49 years. 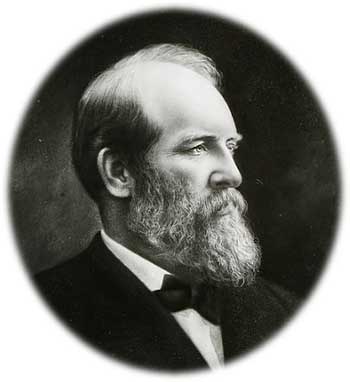 This Cleveland Memory Project highlights items found in the James A. Garfield Collection in the archives of the Hiram College Library.

Funding for this project was made possible by the Gladys Krieble Delmas Foundation.