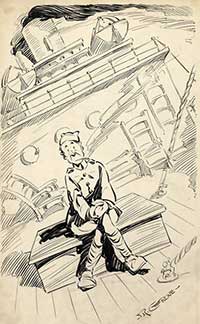 World War I cartoon of a soldier on a ship.

Roy Grove, cartoonist for The Cleveland Press, was born James Roy Grove in Indianapolis, Indiana on June 23, 1893. He was the son of James Sterling Grove and Zella L. Grove (nee Dobbs) and the brother of Pearl (Mrs. Edward M.) Fritz (née Grove) and Harry Grove. The family moved to the Cleveland, Ohio area in the early 1900s.

It is believed that Grove may have been enrolled at the Landon School of Illustrating and Cartooning as a teenager, since there is a record of his work in Landon School of Art: 1927. This magazine showcased the school’s 100 most outstanding or successful students, many of whom were famous fashion illustrators, cartoonists, and platinum age comic artists. Roy Grove’s "Babe Pinelli" appears in this issue. Pinelli was with the Chicago White Sox in 1918, the Detroit Tigers in 1920 and the Cincinnati Reds from 1922 to 1927.

Grove was a graduate of East Tech High School in Cleveland, Ohio and of the Pratt Institute of Art in New York City.

In 1918 he was issued a United States passport to travel to Great Britain, France, Switzerland and Italy "to supply war cartoons and art to this corporation which furnishes same to three hundred twenty-six daily newspapers in the United States." The corporation referred to on his passport was the Newspaper Enterprise Association (NEA). Among other papers, his cartoons were published in The Cleveland Press, Cleveland, Ohio.

According to an entry titled Obscurity of the Day: The Boys in the Other Car dated January 11, 2008 in Stripper’s Guide, a blog that discusses the history of the American newspaper comic strip, Roy Grove was "a cartoonist in the NEA stable from 1917 until the mid-20s and did his best work on the daily panel, The Boys in the Other Car. The cartoon was derivative, taking its cue from features like Indoor Sports and Eddie's Friends, but a good read nevertheless …The Boys in the Other Car ran from November 26, 1919 through August 6, 1920." 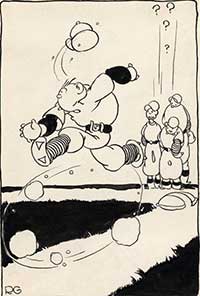 Grove cartoon of a baseball player running the wrong way.

Later Grove was a sports cartoonist for National Enterprise Association and the collection contains some of his cartoons from the mid-1930s that have "Jeburn Features Syndicate" on them.

He continued to live in his childhood home at 2927 Coleridge Road in Cleveland Heights, Ohio with his mother, Zella L. Grove until her death in 1956. Shortly after that he married Hazel M. Altland and she moved into the Cleveland Heights home.

Roy Grove died on December 2, 1958 at Hanna House of University Hospitals after a brief illness. He was buried at Knollwood Cemetery in Cleveland, Ohio.

The collection of cartoons that can be accessed at the below link was donated to Cleveland State University Library Special Collections Department by the Gardner Family. This family lived next door to Mrs. Roy Grove on Coleridge Road beginning in 1968. Mrs. Grove gave the drawings to the family before she moved to the Alcazar Hotel where she lived until her death in 1977.

View all the cartoons in the collection.