The Sweetest Town on Earth

Medina, Ohio was founded in 1818 and incorporated as a village in 1835. The city is well known for the Victorian architecture on its picturesque square that has been restored to make its residents feel as if they’re stepping back in time. The city has a population of approximately 26,380 people and is the county seat of Medina County. In the summer, the city enjoys band concerts, festivals and art shows, and in the winter, an ice carving festival.

In July of 2009, Money Magazine recognized Medina as one of the "Best Places to Live" in their list of best small towns. In spite of the city growing at a rapid rate over the last 20 years, it has managed to maintain much of its historical character and small town charm through strong community effort and commitment to keeping the city beautiful.

This collection is made up of mostly photographic images and a small number of manuscripts that bring together the small town feel of Medina and illustrate its simplistic appeal. The collection documents, at present range in date from the 1840’s to the 1960’s. The materials originate from Special Collections at the Michael Schwartz Library, Cleveland State University, from the Medina County District Library repository, and from the Medina County Historical Society repository. In attempts to chronicle the history of Medina, Ohio, the site will be a work in progress, always evolving and growing as a work. 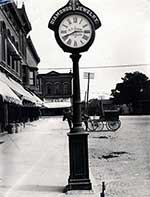 Clock on The Square in Medina, Ohio.

The Franklin Sylvester Local History and Genealogy Room at the Medina County District Library offers a variety of resources for information about Medina County history. It contains a general genealogy connection that provides reference information for researching genealogy across the country as well as indexes covering Ohio and histories for local counties. It also contains works by local authors and newsletters from local historical societies. Microfilm containing past issues of the Medina County Gazette and county census, tax, birth, death, and marriage records are also available.

The Medina County Historical Society was formed for the purpose of promoting, maintaining and preserving all such things as relate to and are of historical interest pertaining to the County of Medina, State of Ohio. The Historical Society allowed their photograph collection to be shared and sorted through for our selection purposes and contributed much of the materials seen here.