Darius Milhaud (1892-1974) was a French composer and teacher. He was a member of Les Six (also known as The Group of Six) and one of the most prolific composers of the 20th century. A modernist composer, his compositions are influenced by jazz and make use of polytonality.

The rise of Nazi Germany and invasion of France forced the Milhauds to emigrate to the United States in 1940. Because of his Jewish background, Milhaud could not return to his native country until after the war concluded. He secured a teaching post at Mills College in Oakland, California, where he composed and collaborated with other composers during the war years.

From 1947 to 1971, he taught alternate years at Mills and the Paris Conservatoire, until poor health compelled him to retire. He died in Geneva at the age of 81, and he was buried in the Saint-Pierre Cemetery in Aix-en-Provence.

Katharine Warne created the Darius Milhaud Society in 1984, 10 years after Milhaud's death, with the purpose of preserving and promoting his works and legacy. As founder and president of the society, Warne maintained a personal and professional relationship with Madeleine Milhaud, who performed in concerts and provided information about Darius for the society. 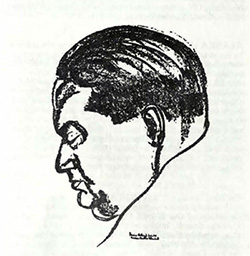 Drawing of Darius Milhaud made by Marion Claudel in January 1944.

The Darius Milhaud Society published a newsletter for almost every season from 1985 to at least 2002. The Newsletters contain details about performances and festivals of Milhaud's music as well as a plethora of information relating to or directly about Darius Milhaud. Katharine Warne appears in photographs with or relating to Madeleine Milhaud in these newsletters.

The newsletters contain valuable glimpses of the body of Milhaud's work, interviews with Madeleine Milhaud, people that were connected with Milhaud. Included in the newsletters as well is a chronicle of virtually every performance of Darius Milhaud's music since 1985, including descriptions and performance details.