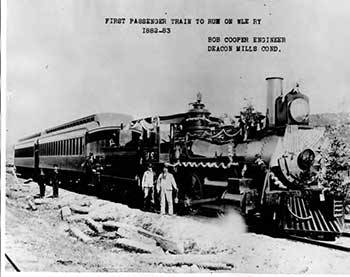 The Wheeling and Lake Erie Railroad (WLE) was founded in 1871 and it was originally designed to span the distance from the Ohio River through the coal fields of southeastern Ohio to the ports on Lake Erie. Over several decades the WLE would grow through construction and mergers into a significant transport feed to Cleveland’s growing industries, mainly freighting coal. In the beginning, however, only 13.5 miles of track had been laid by 1887, and the railroad was jokingly called the "Wailing and Leg Weary." After several early financial embarrassments, including a complete shutdown in 1879, Jay Gould, an American financier who became a leading American railroad developer and speculator, began buying large amounts of Wheeling’s stock the following year. With the fresh influx of funding, construction resumed.

Other railroad developments would add to the WLE lines. The Cleveland, Canton and Southern railroad (CC&S), originally the Youngstown and Connotton Valley Railway, was established in 1877 and created a line from Bowerston (south of Canton, OH) to Youngstown. The Youngstown and Connotton Valley purchased the bankrupt Ohio and Toledo Railroad in 1878, which ran from Carrollton to Oneida, and shortened the name to Connotton Valley Railroad Company (CVR). The CVR continued to expand its line, and by 1885 the Connotton Valley road had a total of 160.59 miles of narrow gauge (three foot wide) track in operation, stretching from Cleveland to Coshocton. In Cleveland, CVR tracks extended along Canal Street to the corner of Ontario and Huron Avenues, where a new passenger depot was opened in 1883. Sold under foreclosure to bondholders on May 9, 1885, the railroad renamed as the Cleveland and Canton Railway. Tracks were converted to standard-gauge over the next three years and merges with three smaller railroads in May 1892 expanded the line to Zanesville. The Cleveland and Canton added Southern to its name (CC&S) to better describe the 209.59 miles of track it now operated. 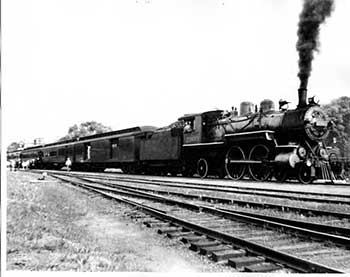 The Cleveland, Belt and Terminal Railroad (CB&T) was chartered on May 13, 1891 to speed up the movement of freight through the Cleveland area. When the CB&T opened for traffic in 1893, its tracks ran from the Cleveland, Canton and Southern in the Flats westward to the Big 4 (Cleveland, Cincinnati, Chicago and St. Louis Railroad) tracks near Denison Avenue.

Both the CC&S and CB&T railroads deteriorated until their purchase by the WLE in 1899. In 1900 the WLE had 435.7 miles of track in operation, with the majority of its earning coming from freight, particularly coal, coke, iron ore, stone and sand. At its height, the WLE ran from the Pittsburg region to Lake Erie at Huron and Toledo, and from Cleveland to Zanesville. These two sections of the line crossed at Harmon, Ohio which was just east of Brewster. With two busy main stems crossing on the map of Ohio, the road’s nickname for many years was “The Iron Cross.” The WLE had reached Martin’s Ferry, Ohio in 1891, and Wheeling, Ohio by 1892. It would continue to expand its territory through the acquisition the CC&S and the CB&T. Ironically though, the historic mainline of the Wheeling and Lake Erie never actually reached Wheeling, West Virginia.

As it had expanded its territory through mergers and transfers, the Wheeling and Lake Erie found itself leased by the Nickel Plate Road (NKP) in 1949 for fifteen years. In 1964, NKP merged with Norfolk and Western Railway. Later the Norfolk and Western merged with the Southern Railway in 1982 to form the Norfolk Southern Railway (NS). On June 1, 1990, NS sold portions of their lines in Ohio and Pennsylvania, including most of the original lines of the historical Wheeling and Lake Erie to a new regional railroad which reclaimed the name of the Wheeling and Lake Erie Railway, which still operates today. The only portions of the original Wheeling not owned by the current company are the Norfolk Southern line west of Bellevue, the former Cleveland Division line south of Harmon (Brewster) and the Huron, Ohio docks.