The "Akron Sound" Museum was established in 2015 to celebrate, commemorate and preserve the contributions and musical history of the Akron, Ohio area. The original mission of the museum was solely focused on the era during the 1970s and 1980s when Akron, and along with Kent, were arguably the punk capital of the Midwest. But over time it has grown to celebrate all of the region's musical heritage while still maintaining and celebrating The "Akron Sound" era as it's primary mission.

Whether the music that came out of Akron and Kent is truly punk, as it's often described, is up to opinion. As Buzz Clic, the lead guitarist of the Rubber City Rebels who also ran the They Crypt that became iconic to the local music scene, said "I don't think any of the bands sounded alike but I think the spirit was the same. We were all just sick of being spoon-fed the music of the day and it appeared that the seat assignments were already taken, so when the "punk, new wave" thing came along, well... there was a wide open door and we all just went through it". So unlike others "sounds" that have risen up in different cities over the years, the label thrown on Akron/Kent at the time had more to do with an attitude than an actual style of music. Those a bit more cynical might even say it was simply marketing, but regardless a vibrant music scene existed...

Some say it started when Clic and his bandmates in the Rebels took over and ran The Crypt, which had up to them basically been a rubber workers bar in the shadow of the Goodyear plant, and booked themselves, along with friends like Devo and Cleveland's The Dead Boys. Forty years later people still talk about the nights at The Crypt. Others steadfastly hold to the idea it started in Kent in the early 1970s when The Numbers Band (15-60-75), and later Tin Huey, performed their originals to excited college crowds at JB's and other venues. 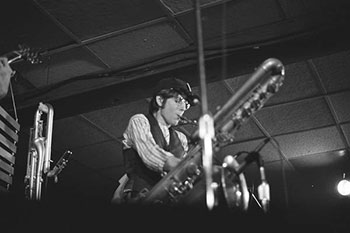 Regardless of when or what it was, during a period that only lasted a few short years a London label, Stiff Records, put out The Akron Compilation album. Rachel Sweet, Devo, Chrissie Hynde, Tin Huey, The Bizarros, The Rubber City Rebels, Jane Aire and the Waitresses all signed major record deals. The "Akron Sound" had its own label with Clone Records and a couple of the performers had their own studios which everyone took advantage of. Clubs like The Crypt, The Bank and JB's in Kent were clearly the place to be.

Other bands like The Numbers Band (15-60-75), Hammer Damage, The Action, Chi Pig, The F-Models, Walking Clampetts, Teacher's Pet, Unit 5 among others also released albums and singles, developing their own large followings throughout the region. Unfortunately the 2003 PBS documentary on the era "It's Everything, and Then It's Gone!" said it best, the amazing window of creativity didn't last. But the music has certainly stayed relevant, as recently as 2015 Soul Jazz Records released Akron, Ohio : Punk And The Decline Of The Mid West 1975 – 80.

The museum and its collection also points a spotlight on the many acts who came before the 1970s. Akron/Kent bands Ruby and the Romantics, who had a Number One single in 1963, and The James Gang took the area's music national before anyone ever heard of an "Akron Sound". The Howard Street Jazz Scene, Folk Music and the active for decades Akron Harmonica Club are also represented. Music which was happening alongside The "Akron Sound", not the least being the the constant stream of Gospel Music that came out of Rex Humbard's Cathedral of Tomorrow, or Bucker and Garcia who cracked the top 10 in 1981 with Pac Man Fever are remembered. It also documents the musicians that followed in their wake such as Joseph Arthur, The Black Keys, Red Sun Rising, James Ingram, Tim "Ripper" Owens and Akron's Hip-Hop scene and others.

Since it's establishment in 2015 The "Akron Sound" museum has assembled a collection of photos, fliers, albums, personal memorabilia, video and audio shot during lives shows, much from the artists themselves. The collection also includes clothing worn by the band, instruments, tour notes, and advertising pieces that tell not only the story of Akron music, but how musicians marketed themselves over the years. The online collection presented here includes digital reproductions of some these photos, fliers, record sleeves and album covers.

This website is the work of "Akron Sound" Museum's Vice President and Archivist Calvin Rydbom. It was made possible with the assistance of museum President Wayne Beck and board member Jimi Imij, whose sister organization The Ohio Hystairical Musick Society has been instrumental in documenting the areas musical history. Also the contributions of Chris Butler (Numbers Band/Tin Huey/The Waitresses/Half Cleveland), Don Parkins (The Bizarros), Buzz Clic (Rubber City Rebels/Buzz Clic Adventure) and so many other Akron and Kent Musicians made this collection possible.