ASM International is the preeminent materials society in the world. Founded in 1913 by William Woodside, a blacksmith who worked for Studebaker, it was originally dubbed The Steel Treaters Club. The society was formed as a means for blacksmiths and other in the steel industry to exchange ideas. Initially the focus of the society was exclusively devoted to steel treating but through the years they expanded their boundaries beyond metals and brought all engineered materials into the society's scope, including composites, plastics and ceramics.

Throughout this century-long evolution, Cleveland has remained the home of ASM's International headquarters, where visitors are dazzled by the awe-inspiring geodesic dome that hovers majestically over the Society's office building. Today the Society boasts more than 80 chapters in a dozen countries with a membership totalling 30,000 materials scientists and engineers. This web exhibit was created to commemorate the 100th anniversary of ASM International. Materials for this web exhibit were selected from the ASM International archives and span much of its illustrious history.

ASM International is known around the world for the depth and breadth of the materials knowledge it disseminates through books, databases, videos, and a myriad of online products. However, very few know about the Origins of this global organization that began a hundred years ago as a group of heat treaters in Detroit who decided to pool their knowledge in an effort to make better automobiles.

The Steel Treaters Club (STC) was originally comprised of nineteen men, all employed in the steel and automotive industries. The club's founder was William Woodside, an enthusiastic blacksmith who worked for Studebaker. The fledgling organization was built upon the principles of shared knowledge and the need to find improved methods for heat treating. It was particularly vital for the free exchange of ideas in the early days, as the United States was soon involved in the Great War, and superior steel manufacturing was essential for the war effort.

Only two years after its inception, the club changed its name to the Steel Treating Research Society (STRS). Soon, other heat treaters joined and they began to form Chapters, including one from the lakeshores of Chicago, led by Chairman T.E. Barker, and Secretary Arthur G. Henry. The organization of chapters was intended to benefit both its members and the wider steel treating community. Chapter participants could transmit their ideas, work, and processes via the American Steel Treaters Society (ASTS) journal to fellow members. Scientific research conducted under controlled conditions by qualified individuals could be explored and examined by all the members, who could then apply the new knowledge to real-world issues in the field. 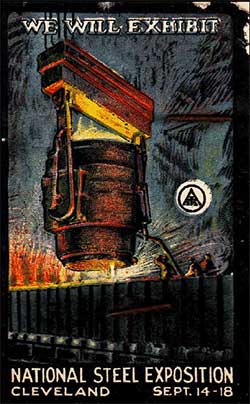 While the National Steel Exposition which this poster was designed for may have been a showcase of metallurgical processes and scientific advances, the poster's creator chose to emphasize the steel workers whose sweat and toil to keep the industry alive. (Courtesy of ASM International).

In a relatively short span of time, the Chicago group became frustrated with the demands put upon them by the Detroit chapter. In particular, they were displeased that the fees they paid were feeding the coffers of their Detroit counterparts.

Their differences led to an organizational division: one headquartered in Detroit, with another newly formed in Chicago. William Woodside continued at the helm of the Detroit faction, which retained the Steel Treating Research Society name. The Chicago faction broke off into the ASTS with a dedicated force of forty-four men. In 1918, the ASTS implemented an incentive program permitting new members to join exempt from initial membership fees if they joined prior to New Year's Day 1919.

It took several years and the negotiating know-how of Col. A.E. White, who would be elected President of the organization in 1921, to reunite the two sections. Differences were set aside and the two groups were officially united during the Philadelphia Exhibition in September 1920. After some heated discourse, the freshly minted American Society for Steel Treating (ASST) settled on Cleveland as its new home base. By the time of the unification in 1920, there were 3237 members in 31 chapters promoting the exchange of methods and ideas.

Along with real-world experience, the Society focused on Education as a means to develop and expand technical knowledge. Education nurtures innovation, and its publications placed great emphasis on both the theory behind heat treating operations, and the steps involved in the practical application of those theories. Articles on both shared the pages of the first ASST Handbook in 1923. Encouraging the exchange of ideas and the related benefits that follow has remained the fundamental purpose of ASM International, predating the unification of the competing Chicago and Detroit into organizations. An editorial written by ASTS staff titled "The Surest Way to Receive help is to Give It," encouraged all steel treaters to contribute their findings to their publication.

One of the most far-reaching methods in which ASM has contributed to the education of those in the metals and materials professions is through the publication of the Metals Handbook and its successor, the ASM Handbook. Another major advancement was the Metals Engineering Institute, which opened in 1954. The purpose of the Institute was to serve as an educational division for the Society. From its inception, the courses provided by the Institute were accredited by the National Home Study Council, an agency recognized by the United States Office of Education. Today, tutelage of all in the materials professions continues with a vast array of classes including Practical Fracture Mechanics, Surface Engineering, and Materials Processing.

Education feeds into Innovation which, in turn, has always been of the utmost importance for those in the metals and materials industries. From the first convention of the American Society for Steel Treating, expositions, shows, and congresses have been held to showcase new inventions and present new ideas. One of the trade's earliest expositions was the Metal Show, with the first being held in the fall of 1919, coinciding with the first convention of the Steel Treater's Society. Held in Chicago at the 7th Regiment Armory, the Metal Show was an unprecedented event in the United States, drawing over 10,000 people.

Another early example of extending the reach of the organization occurred in 1924 with the visit of Japan's preeminent metallurgist Dr. Kotaro Honda at the Annual Convention. Dr. Honda was the Director of the department of metallurgy at Tohoku Imperial University, Sendai. Word was spreading across the Pacific Ocean of this budding Society devoted to the advancement of the metal industries. Such expos, trade shows, and collaborations were among the earliest means by which the ASST spread its Global Reach. The act of seeing and being seen has always played a pivotal role in maintaining appearances and conveying a sense of belonging and authority. Equally important is the need for effective branding and in 1933, the ASST became the American Society for Metals (ASM).

Additional examples of ASM's authority came in the form of the first World Metallurgical Congress, held in 1951. Representatives from every industrial nation in the world were invited to spend five weeks in the United States. The Congress was a means for scientists and engineers from across the globe to reconnect after World War II.

The metallurgical Congress proved an overwhelming success, in no small part due to the innumerable Prominent Figures who played a crucial role in making the Society a most respected metals organization. One of the most famous of these was Zay Jeffries, known as the "Dean of American Metallurgists. Renowned for his many discoveries in metallurgy, he was a founding member of the Cleveland Chapter of ASST. He served as National President of the ASST, and was the Director General for both the First and Second World Metallurgical Congresses. At the time, he was the vice-president of General Electric Company.

Dr. Jeffries was not alone in his unwavering dedication to metal. A key figure in the emergence of ASM and the proliferation of chapters was William Hunt Eisenman, who served as chief administrative officer for 40 years. During his travels across the country, he established new chapters, and did so at an astounding rate. Of the 49 chapters that existed in 1940, Mr. Eisenman was responsible for the organization of 41 of them. Having dedicated four decades to ASM and its expansion, Eisenman passed away in 1958, a year before the completion of the geodesic dome and the relocation of the headquarters to Metals Park. 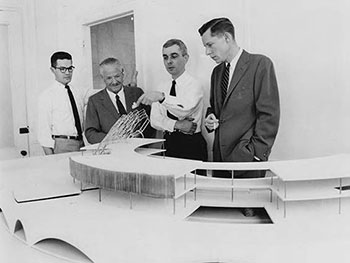 William Eisenman (2nd from the left) and architect John Terence Kelly (2nd from the right) look over a model of Kelly's design for the new ASM office building and geodesic dome. (Courtesy of ASM International)

Composed of more than 12 miles of aluminum tubing, the geodesic dome named the Space Lattice reached 103 feet into the skies above Russell Township. The structure and its skeletal construction lay open for the weather and wanderers to see as the world's largest open air geodesic dome. One of the great modernist architectural marvels, the design was inspired by world-renowned architect Buckminster Fuller. "Bucky" held 28 patents, wrote 30 books, and was the second president of Mensa, holding that title from 1974 through 1983. Almost assuredly his greatest accomplishment was the geodesic dome. However, it was an Elyria area architect, John Terrence Kelly, who recommended that the dome be constructed to surmount the office building. Mr. Kelly, an architect of some renown as well, was inspired by the work of Buckminster Fuller.

The Relocation of ASM International Headquarters to Metals Park is one of the landmark events in the society's history. Previous to the relocation, headquarters was located in an old stone mansion at 7301 Euclid Avenue. The new ASM International campus was completed in 1959, consisting of the dome that hovered majestically over a semi-circular office building, the Eisenman Mineral Garden, and 100 acres of farmland, all of which was donated by Mr. Eisenman. (Currently Materials Park is comprised of 45 acres of land.)

In 1983, ASM expanded its materials focus beyond metals, and brought all engineered materials into the society's scope, including composites, plastics, and ceramics. Today, ASM members are responsible for products made of a variety of materials in fields as diverse as automotive, aerospace, electronics, defense, and medical.

At the beginning of the 21st Century, ASM's educational focus expanded beyond those already in the materials field. In an effort to reach high school students, ASM initiated its first Materials Camp in the summer of 2000. Since then, dozens of such camps have been held throughout the world, inspiring thousands of students with hands-on experiences and dedicated teachers. What began in 1913 as little more than a call to friends in the Detroit area has evolved into an internationally respected institution comprised of more than 80 chapters in a dozen countries. Throughout this century-long evolution, Cleveland has remained the home of ASM's International headquarters. The office building, renovated in 2011, was declared a Historic landmark by the state of Ohio. The Present and Future of ASM International will assuredly continue to shine bright. As of 2010, there were at least 36,000 members of the Society. Recently a partnership was forged with Eurospan Group, a London-based company specializing in the distribution of American publications. ASM International's continued success and expansion will be assured by its continued emphasis on growing the knowledge base and finding innovative ways to disseminate that knowledge.

Amidst the trees and rolling hills of Russell Township stands the geodesic dome which serves as the most recognizable feature of Materials Park.(Courtesy of ASM International)

This web exhibit is a collaborative effort between the Cleveland Memory Project Team, Pursue Posterity and ASM. We would like to take this opportunity to bid special thanks to the ASM Cleveland Chapter whose generous contributions made this project possible.