The first municipally-run, outdoor civic theatre in the country, Cain Park was the brainchild of Cleveland Heights Mayor Frank C. Cain and Heights High School drama teacher Dr. Dina Rees "Doc" Evans. Rising from the ashes of the Great Depression, Cain Park was built using finances and labor made possible by New Deal agencies, namely the County Soldiers and Sailors Relief Commission and the Works Progress Administration (WPA). From the beginning, "Doc" Evans' plans for the Park were ambitious, yet she accomplished nearly everything she set her mind on. Throughout the 1940's, Cain Park Theatre staged at least one production for each week of its ten-week seasons. These productions included works by Shakespeare, Moliere, Ibsen, Sardou, Pirandello, Gilbert and Sullivan, and countless others. There were dramas, musicals, period pieces, and comedies. No matter the genre, the seats at Cain Park's amphitheater were always full, during both good times and bad. The trials of a country at war and competition from the Golden Age of Hollywood did little to slow down the open-air theatre in the woods between Taylor and Lee roads. 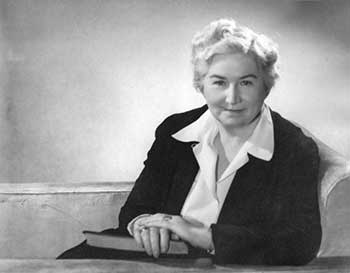 In fact, Cain Park Theatre, led by its co-founder and manager "Doc" Evans, did all it could to keep morale up during World War II. In March of 1942, "Army Red!", an original production written by Cain Park alumnus and serviceman John Price, showed the citizens of Cleveland Heights what it would be like if an actual air raid were to take place in their community. Cain Park Theatre was awarded a Citation of Merit by the Office of Civilian Defense for this effort. Later that same year, in August, a "Victory Sing" was held in which the community gathered at the Park to sing patriotic songs, led by the Cain Park Choral Society and the Cleveland Heights Symphony Orchestra. The following year, the Office of War Information (OWI) contacted "Doc" Evans about staging an "Industrial Show", a pageant to celebrate the contributions of Americans on the home front working in manufacturing plants to support the war effort. A "grand spectacle" titled "Flight For Freedom" was planned, in cooperation with the Jack & Heintz Co. of Cleveland, but it never came to fruition, mainly due to the U.S. Government's decision to eliminate the OWI.

Some of the ways that Cain Park Theatre helped Americans get through World War II were more subtle, such as the Sunday Evening Community Hours that featured a guest speaker each week who would give a talk on topical issues and, often, moral and philosophical concerns of the day. However, perhaps the most telling page of the story of Cain Park's contribution to the war effort is one found towards the end of a theater program from the week of July 23, 1944. It lists the names of over eighty young men and women, all of whom had either played on the stage or worked behind it, who were currently serving overseas. Underneath it was an "In Memoriam" dedicated to three young men who would not be returning home. 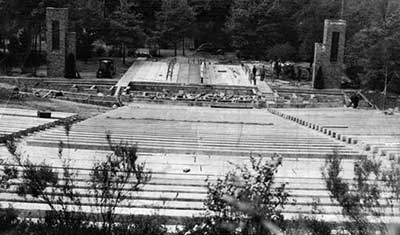 Construction of the stage for Cain Park Amphitheater, 1939

Despite all this success, Cain Park never strayed from its roots as a municipally-owned venue operating with Mayor Cain's goal of providing dramatic entertainment for the community at an affordable price. It is safe to say that not only did Cain Park fulfill this mission, it also achieved "Doc" Evans' vision of becoming not just a theatre, but a school of the theatre, where those with acting talent and ambition could find an outlet. In return for this gift, the many alumni of Cain Park over the years gratefully served not just their community, but their country as well.

See a timeline of events.

This website is the practicum project of Kent State University MLIS/IAKM student, Sean Dolan. He would especially like to thank Calvin Rydbom of Pursue Posterity and Kara O'Donnell of the City of Cleveland Heights' Department of Planning and Development. He would also like to thank the Michael Schwartz Library staff in Special Collections, Digital Initiatives and the Digital Production Unit for their help and guidance.