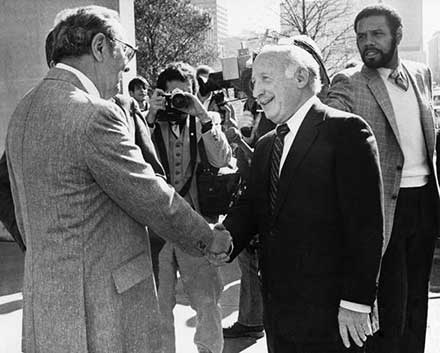 Jospeh E. Cole (1915-1995) was a Cleveland industrialist and entrepreneur, a former Cleveland State University Trustee, and the last owner of The Cleveland Press.

Cole's company, the Cole National Corporation, was originally the National Key Company when Cole acquired it in 1950. It specialized in providing key-cutting services to customers in retail venues. Over the course of more than 50 years in business, it expanded its retail ventures from everything including children's toys and cookie-baking to to shoe repair and watchbands. Now head-quartered in Mayfield Heights, CNC operates in two segments, Cole Vision, which offers optical products and services, and Things Remembered, which offers personalized gifts through its stores, catalogs, and website.

Joseph Cole was long active in the Democartic Party and was, among other things, the Ohio chairman of John F. Kennedy's campaign for the presidency in 1960. In the 1950's, Cole was a minority owner of the Cleveland Indians and twice made unsuccessful bids to buy the baseball team.

In 1980, Cole purchased The Cleveland Press and vowed to revitalize the failing newspaper, and he did make some innovations to the publication including the introduction of a Sunday and a morning edtion. However, because of losses in advertising due the depressed economy, Cole published the final edition of the 103-year-old paper on June 17, 1982.

In 1984, Joseph E. Cole donated the contents of The Press editorial library, or morgue, to Cleveland State University Library where it is now part of the library's special collections. Find out more about The Cleveland Press Collection.