"If you can save the Huletts, it will be a miracle," John Bowditch [SIA], curator of mechanical engineering at the Henry Ford Museum in Dearborn, Mich., told this writer several years ago. He knew well the railroads' penchant for demolishing and discarding their IA patrimony, no matter how significant. While it is way too soon to announce a miracle, there is reason for cautious optimism concerning preservation of the four Hulett ore unloaders at the C&P Ore Dock in Cleveland.

In March, ownership of the 44-acre dock transferred from Conrail (whose determination to destroy the Huletts was thwarted only by timely designation of the dock, with City Council support, as a Cleveland landmark) to the Cleveland-Cuyahoga County Port Authority. The $6.15 million purchase brings these magnificent industrial artifacts - the last of their kind on Lake Erie, and among the last anywhere on the Great Lakes - under local control by a public agency, a critical first step toward their preservation. 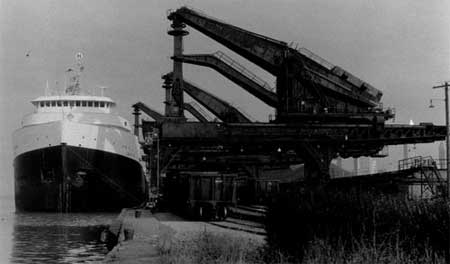 The C&P Ore Dock continues to operate, receiving pelletized ore (taconite) delivered by 1,000-foot self-unloaders. The port authority, meanwhile, has engaged a consultant to prepare a new master plan evaluating the scope of port operations and charting its future. In April, representatives of various constituent groups supporting preservation of the Huletts - including the Cleveland Waterfront Coalition, Ohio Canal Corridor, Inc., and the Committee to Save Cleveland's Huletts - were invited to meet with port officials and TranSystems Corp., the firm hired to prepare the master plan, to discuss their concerns and provide background on the history and significance of the Huletts. John P. Debo, Jr., superintendent of the Cuyahoga Valley National Recreation Area, was among those who testified. He spoke eloquently on behalf of preserving the Huletts, both as a unique testament to Cleveland's industrial heritage and because of their location at the gateway to the recently designated Ohio & Erie Canal National Heritage Corridor.

Transfer of the C&P Dock to public control, meanwhile, has opened the way for its listing in the National Register of Historic Places. In 1995, the Ohio Historic Site Preservation Advisory Board reviewed and approved the entire dock - the four Huletts, together with an associated powerhouse, machine shop, office, and other ancillary structures and equipment - for listing in the National Register. Conrail, however, objected to the listing, and the property was subsequently determined eligible but not actually listed. Last April, the Committee to Save Cleveland's Huletts wrote to State Historic Preservation Officer Amos Loveday requesting that his office proceed with the listing. The National Park Service listed the property in October.

Listing in the National Register adds to the many other distinctions enjoyed by Cleveland's Huletts, which were first put into service in 1912. Besides being a Cleveland landmark, the C&P Ore Dock was recorded by the Historic American Engineering Record of the National Park Service in 1979. The Hulett unloaders have been selected for designation as a Historic Mechanical Engineering Landmark by the American Society of Mechanical Engineers (a landmark ceremony is planned for late spring, in conjunction with the one hundredth anniversary of the machine's invention), and their inventor, Clevelander George H. Hulett, recently was nominated to the National Inventors Hall of Fame. C.P.M. 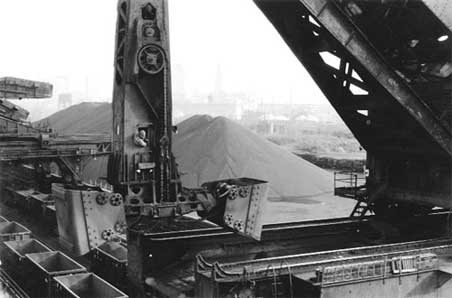 AUTHOR'S NOTE: While many assumed that bringing the landmark Hulett unloaders under local control by a public agency represented a critical first step toward preservation, that has not been the case. In November 1998, the Cleveland-Cuyahoga County Port Authority announced its intention to scrap the Huletts and to "mitigate" the loss by saving "a key portion of one Hulett" at another location still to be determined. It immediately applied to the Cleveland Landmarks Commission for a "Certificate of Appropriateness" to remove all four Huletts, together with the powerhouse, machine shop, and other ancillary structures erected for the Pennsylvania Railroad in 1911-12. At its meeting on December 10, 1998, the Landmarks Commission turned down the Port's request, delaying demolition for six months. The Port can return to the Commission with its request in early June. At that time the Landmarks Commission may impose at most a second six-month delay. The Port will then be free to proceed with demolition.
[added December 29, 1998, and updated January 21, 1999]