Ore Unloading Machines for Use at Receiving Docks*

The rapid and economical unloading and handling of iron ore is one of the special features of many of the lake ports, and prominent among the ore unloaders is the Hulett machine, which is shown in the accompanying cuts. It is the invention of Mr. Geo. H. Hulett, Third Vice-President of the Wellman-Seaver-Morgan Co., of Cleveland, O., which is the exclusive builder, and to which we are indebted for information. The machines may be operated either by steam or electricity. Fig. 1 shows the two electrically-operated machines recently erected at Lorain, O., for the National Tube Co.,; Fig. 2 shows three electrically-operated machines at the ore dock of the Lacawanna Steel Co., at Buffalo, N.Y., and also shows the two Hulett conveyor bridges. 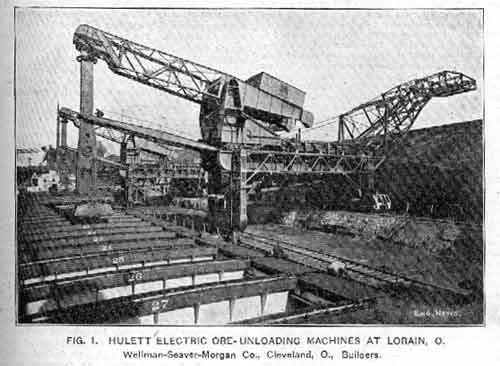 The Hulett ore unloading machine has two main girders at right angles to the face of the dock, supported by steel towers mounted on trucks so that the machine can travel along the dock and be spotted at the hatches of the ore steamers. The towers or legs are usually spaced far enough apart to allow of four lines of track being laid under the machine. Along these girders travels a frame or carriage upon which is mounted a long pivoted walking beam, and from the outer end of this beam is suspended a vertical leg having a scoop bucket at the bottom. Beneath the beam is a parallel motion bar, hinged to the carriage and to the leg. The walking beam lowers and raises the bucket, while the travel of the carriage moves the beam and bucket out to the ship and back to the dock. To reduce the travel of the carriage, receiving hoppers are placed between the main girders, at the dock end of the machine; these discharge either into railway cars beneath, or into a hopper car which runs out on a cantilever frame to dump the ore into cars or a stock pile. 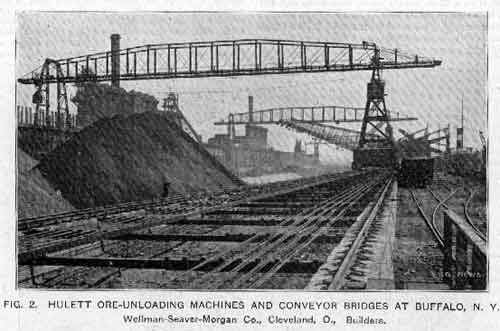 The bucket is of ten tons capacity, and is opened and closed by hydraulic power on the steam machines, or by specially designed motors on the electric machines. Fig. 3 shows the bucket scooping up a load of ore in the hull of the steamer "Augustus B. Wolvin," which is one of the modern ore carriers, having plate girder deck beams with no columns or stanchions to obstruct the hull. The hatches are separated only by narrow strips of deck carried by these girders, and the sides are inclined to form a hopper-shaped receptacle for the ore. The maximum spread of the bucket is 18 ft., and by telescopic motion it can be made to reach from the center of one hatch to that of the next hatch, the suspended leg being mounted in rotating trunnions in the walking beam, so that it can be revolved on its vertical axis and enable the bucket to reach out in any direction. The bucket can also be traversed across the hold by the movement of the carriage from which the leg is suspended. In ordinary boats the machines can reach 90% of the ore, and in some of the modern boats they have actually unloaded 97% without the aid of shovelers. The bucket operator rides inside the vertical leg, close to the bottom, as shown in Fig. 3, and controls all movements of the bucket. Another operator, on the carriage, controls the movement of the carriage and the travel of the machine along the dock, as well as the movement of the bucket car above mentioned.

At the Buffalo plant, Fig. 3, the ore is delivered onto the stock piles by the unloader, and is then handled by two Hulett traveling conveyor bridges of 374 ft. 6 ins. total length, fitted with seven-ton buckets. These buckets dump the ore into a self-propelling hopper which spans two railway tracks upon which run the self-propelling hopper-bottom cars for filling the bins. In this way the conveyor buckets can be kept in continual operation without waiting for the return of the bin cars. 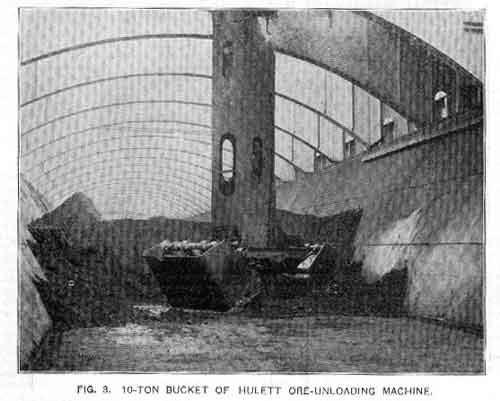 The machines are designed to deliver one bucket load of ten tons a minute. The four machines of the Pittsburg & Conneaut Dock Co., at Conneaut, O. (which are operated by steam) have unloaded 7,257 gross tons in 4 1/2 hours, or over 403 tons per machine per hour, the largest amount taken out in one hour by one machine being 681 tons. There are now about twelve of the machines in operation.