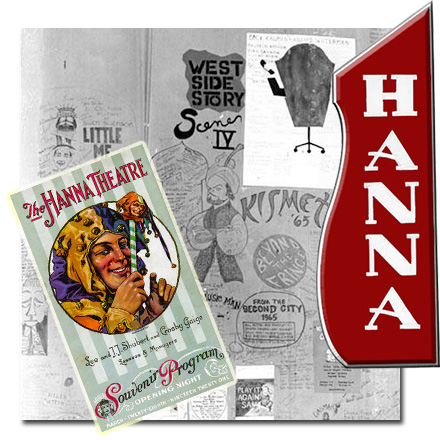 Browse Photos of the Hanna Curtain

Founded in 1921, the Hanna Theater, in Cleveland, Ohio "served as the mecca of legitimate theater in Cleveland for over 60 years, providing Clevelanders with a source of quality theatrical entertainment rivaling Broadway" (Encyclopedia of Cleveland History, 1987).

The Hanna Theater Curtain is a unique part of Cleveland's theater history. It was common practice for traveling companies to leave their mark backstage on theater curtains; it might be a shirt or poster stitched to the lining; an original drawing by the scene designer; signatures of the cast; anything which proclaimed "we were here!" Over the years, the Hanna Theater Curtain accumulated hundreds of such posters, T-shirts, colorful, whimsical drawings, signatures of legendary names in the theater, and miscellaneous objects such as dolls and balloons. In time, the Hanna Curtain itself became a legend within the performing arts community of Northeast Ohio--a unique, unsurpassed collage of theater memorabilia.

Today, all that remains of the elegant Hanna Theater Curtain is the canvas liner. By 2002, badly worn and in need of substantial restoration, the curtain liner was rescued from destruction by faculty members in the Dramatic Arts Department of Cleveland State University. It is now housed in the Special Collections Department of the University Library, awaiting restoration efforts. A unique treasure of Cleveland's theatrical past, the Hanna Theater Curtain has inestimable educational value for today's theater arts students, and for the broader performing arts community.