At the time of its dedication in 1925, Parmadale Children's Village of St. Vincent de Paul led the way for a new style of how orphanages operated. It was the first orphanage to move away from the institutional type of care and to implement a cottage residential plan. Parmadale was a non-profit organization, established with planning and funding from the Catholic Charities Corporation, a fundraising agency focused on charities in the Catholic Diocese of Cleveland. The Catholic Charities Corp. purchased 180 acres of land and constructed Parmadale at the location of 6753 State Road Parma, Ohio (see Google Map). It is still there to this day under the name of Parmadale Family Services.

The construction company chosen to build Parmadale was John Gill & Sons Co., a firm well-represented in Cleveland by its previous work on such noteworthy buildings as the Terminal Tower and the Federal Reserve Bank. The architect for this project was George S. Rider. Initially there were only 12 cottages, a school, central dining hall, kitchen, power house, and laundry room. Future additions included an athletic field and gymnasium in 1926, a pool in the 1930s, and a new administrative building in 1953, all necessitated because of the facility's gowth in population due to mergers and the closure of other orphanages.

Parmadale Children's Village of St. Vincent de Paul was originally populated by boys from the closing St. Vincent's de Paul Orphanage (St. Vincent's Orphan Asylum) and St. Louisville Orphanage. St. Vincent's de Paul Orphanage or St. Vincent's Orphan Asylum, created in 1853, was run by the Sisters of Charity of St. Augustine, who, upon the closing of the orphanage went to Parmadale. Their service helped make Parmadale a success. Parmadale Children's Village of St. Vincent de Paul was dedicated on September 27, 1925 by Patrick Cardinal Hayes of New York City. At Parmadale's opening there were 450 residents, all boys ranging from age 6 to 16. At Parmadale's opening the orphanage was run by 35 Sisters of Charity, a chaplain (a position Father John F. Gallagher held from 1925 to 1940), a medical team, and numerous volunteers. 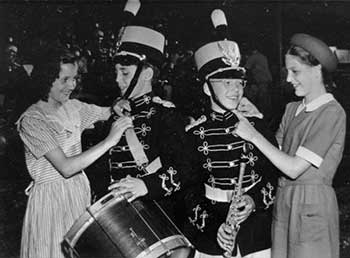 Parmadale became a co-educational facility in 1947 with the arrival of girls from St. Joseph's Orphanage of Girls. New cottages, dedicated by Bishop Edward Hoban that same year, were built to accommodate the additional population. Parmadale also took in orphans from the Home of the Holy Family when it closed in 1952. Parmadale's Children's Village of St. Vincent de Paul merged with St. Anthony's Home for Boys and Young Men in 1975 and became known as Parmadale Family Services.

By the 1980s as the institutionalized orphan population decreased, Parmadale expanded its mission to serve children with special needs such as emotional or behavioral problems and addictions. Due to Parmadale's change in population more buildings were built including the first Intensive Treatment Facility in 1989 and the second Intensive Treatment Facility Program and the Multi Purpose Center in 1994. In 2009, Parmadale Institute, a residential treatment facility intended to treat up to eighty adolescents with behavioral health needs, was constructed, consequentially bringing an end to the original cottage residential plan. Currently, Parmadale Family Services helps adolescents with behavioral health needs such as those who are chemically dependent, have experienced a trauma, attempted suicide, or are a danger to themselves or others.

This collection was donated to the Special Collections of the Michael Schwartz Library by Jim Lynch who is an alumnus of Parmadale. The collection contains photographs of Parmadale that range from the 1920s all the way to the 1980s. 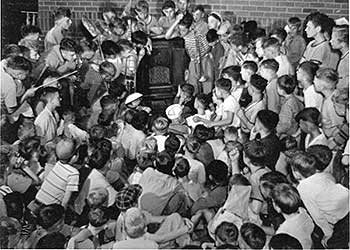 Children listening to the radio.