Sandusky, Ohio (see Google map) was founded as Portland Township in 1816, first identified as Sandusky City in 1817, and officially platted and recorded as the city of Sandusky in 1818; it was incorporated in 1824. The city of Sandusky is in the Firelands region of the Western Reserve, situated where Sandusky Bay flows into Lake Erie (about halfway between Toledo and Cleveland). The city's early economic and demographic growth was greatly influenced by the natural environment and resources of the region.

Transportation innovations, such as steamboats and railroads, brought migrants from the east into the city and beyond, and moved raw materials through the city for delivery throughout the Midwest. The moderating effects of Lake Erie on the region's climate influenced the development of agriculture – most notably in establishing Ohio as an early center for the wine industry in the United States.

Other natural resources, including limestone, nearby forests, and the abundant waters of Lake Erie, inspired a variety of industries, including ice harvesting. At various points in its history, the Sandusky region has been a major lumber port, a site of multiple stone quarries, one of the nation's leading lakes fisheries, early aeronautics and the home of innovative manufacturing companies.

Best known today as the home of Cedar Point amusement park, Sandusky's history includes much in recreation and entertainment. Bands and singing societies, frequently inspired by the German culture of many of the city's immigrants, played an important role in the city's culture. The city parks system has been a source of pride for more than a century. 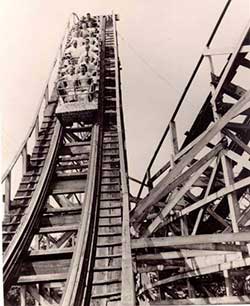 This collection attempts to showcase not only the historically unique aspects of Sandusky but give a general overview of important businesses, locations, people and events that influenced the city. The collection contains images from Sandusky Library and the Cleveland Press Collection.

The Sandusky Collection was made possible by MLIS candidate Angela Presutto and Ron Davidson, Archivist at Sandusky Library. Thanks to Bill Barrow, Kif Frances, Joanne Cornelius, and Lauren Felder, staff members of the Michael Schwartz Library at Cleveland State University for their assistance.