Annals of Cleveland:
A Depression-Era Project of the WPA 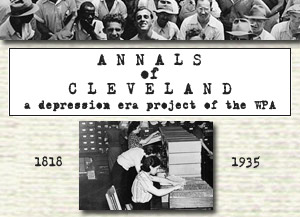 During the New Deal Era, Annals of Cleveland staff summarized and indexed material from early Cleveland newspapers, beginning with the inaugural issue of the city's first paper, the July 31, 1818 Cleaveland Gazette and Commercial Register. The project provided jobs for unemployed white-collar workers during the Depression of the 1930s and created an important record of early life and thought in the city of Cleveland.

This website offers a window into the social context in which the Annals were created and provides a short glimpse of the project as a whole.

Please note: The links below will take you out of Cleveland Memory and into the Cleveland Digital Library .