Parma: "A Proud and Pleasant Place"

The area 7 miles southwest of Cleveland now known as Parma, Ohio (see Google map), was first settled in 1816 by Benajah Fay, his wife Ruth, and their children, who came from New York state. Parma was once part of Parma Township along with Parma Heights, but Parma Heights separated from the township in 1911. Parma was then incorporated as a village in 1924 and later as a city in 1931. See a Brief Timeline of Parma History.

Parma is the home of Cuyahoga Community College West campus, Parma Community General Hospital, German Central Farm, and Parmatown Mall. It was once the home of a Nike missile site and Crile General Hospital, which was a hospital for soldiers and military veterans from 1943-1964. Parma's school district is shared with Parma Heights, and Seven Hills. The area's rich ethnic heritage is derived from the largest segments of its population, the Germans, Poles, Italians, Slovaks, and Irish, who have chosen to make Parma their home over the years.

The majority of photos included in the Parma, Ohio Collection come from the Cleveland Press Collection in the Michael Schwartz Library's Special Collections at Cleveland State University. They depict landmarks and events in the city and a few photos offer glimpses of neighboring towns, Parma Heights and Seven Hills. Landmarks include such prominent buildings as the Crile General Hospital, Cuyahoga Community College West campus, and Parmatown Mall. 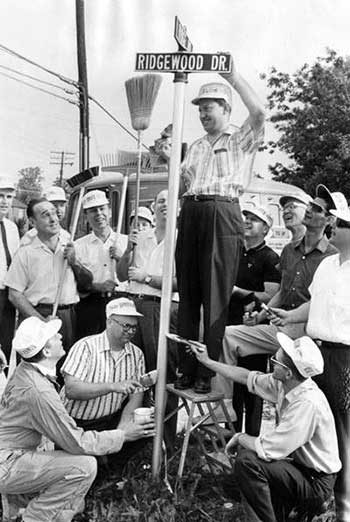 This website is the practicum project of Kent State University School of Library and Information Science student, Michael Ross.