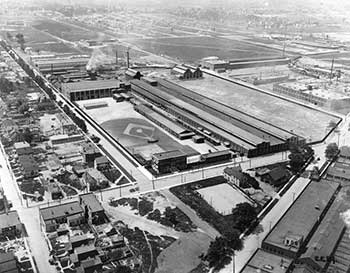 Founded in 1894 as a trolley and bicycle frame manufacturer, the Parrish and Bingham Co. quickly grew to become an important component in Cleveland's expanding industrial economy. Located at the corner of Madison Avenue and West 106th Street – just across the street from the Cleveland auto manufacturer, Winton Motor Cars - the Parrish and Bingham plant was ideally situated to enter the nascent automobile industry.

In 1923, the company merged with Detroit Pressed Steel Co. to become Midland Steel Products Company. By the 1930s, with an expanded line of products that included steel automotive frames and axle housings for cars, trucks and busses; the West 106th Street plant became one of the central suppliers of automotive manufacturing components in the country, and "the largest producer of automotive frames."

World War II and Beyond

Like many other manufacturers in the U.S., the West 106th Street plant rapidly adjusted to wartime production, turning out jeep and truck frames as well as parts for shells and tanks. After the war, the company began to expand its interests beyond the automotive frames business. Midland Steel Products Company became Midland-Ross Co. in 1957, beginning a process of diversification and acquisitions that would continue throughout the 1960s. Industrial Rayon Corporation and the National Casting Company (both of Cleveland) are only two of the many national and regional manufacturers acquired by Midland-Ross between 1957 and 1969.

Beginning in 1969, the company began focusing its research and development efforts on aerospace and electronics products and thermal processes, as well as steel castings, the latter of which dated back to the company's 19th century origins as Parrish and Bingham Company. Midland-Ross flourished during this period, as did the old plant on West 106th Street, which by the 1970s employed nearly 800 Clevelanders. Despite corporate restructuring (leading to changing ownership) and periodic labor disputes, the plant managed to compete as one of only four automotive frame manufacturers remaining in the United States in 1976, and the nation's largest manufacturer of frames for medium sized trucks.