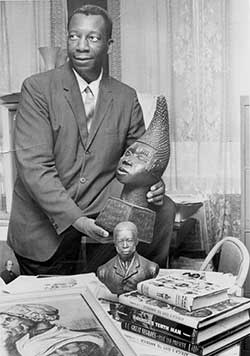 About Our Historical Images

What this site contains

Black Trailblazers, Leaders, Activists, and Intellectuals in Cleveland contains approximately 2000 images of 500 individuals selected from the photographs in the Cleveland Press Collection. This collection was donated to the Cleveland State University Library when that newspaper ceased publication in 1982. The photographs in the collection generally date from the 1920's on, with most of them from 1960 to 1982. The collection is arranged alphabetically by the last name of the individuals. Links have been provided to biographies that are available in the Encyclopedia of Cleveland History.

Each image is identified by the name of the person pictured. Depending on the information available, there is a brief summary of major accomplishments, positions held, and leadership activities in professional, scholarly, and charitable organizations. Birth and death dates are provided when available. With a very few exceptions, all information was taken from the back of the photo and/or from articles in the newspaper clipping files donated by The Cleveland Press. This file contained some articles from the Plain Dealer also. The dates in the citations refer to the date of the newspaper articles, not the date the photo was taken. If there is no citation, all the information came from the back of the photo. 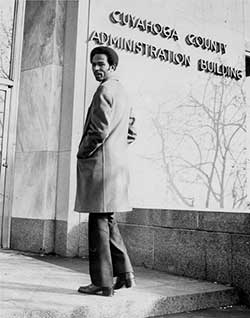 In order to be included in Black Trailblazers, Leaders, Activists, and Intellectuals in Cleveland, an individual had to be either born or raised in the greater Cleveland area or have lived a significant part of his/her life in the region. We have attempted to include individuals who made a significant contribution beyond their own personal and family life to the history and development of Cleveland. Some of these trailblazers are famous, but many more have touched the lives of many others in relative anonymity. We have, for example, included all teachers and clergy on the assumption that their efforts crossed many paths. It is our goal that this site will help recognize and maintain their memory.

Only a few professional sports figures have been included as we offer separate sites devoted to Cleveland sports figures, such as
The Glory Days of the Cleveland Browns, The Top 100 Greatest Cleveland Indians, and League Park: Cleveland's Original Ballpark.

Unfortunately, there were many individuals in the photo collection that could not be included for lack of information about them in the Cleveland Press Collection. As is any web site, this one is a work in progress, so we hope that additional research may be possible in the future. In many cases not all the photos of the collection of individual included have been digitized.

We welcome not only your comments about this site but also additional information about any of the persons included in Black Trailblazers, Leaders, Activists, and Intellectuals in Cleveland, especially photos and information about accomplishments after 1982 when the Press ceased publication. Corrections of information are also welcome. The Michael Schwartz Library invites the donation of photos for use on this site. They could be of individuals already included or of additional persons to be added. The photographs could be added to our permanent collection or, if requested, returned to the owner after digitization for the web site.