September 23, 1935 — Two dismembered bodies were found together in a creek bed that runs from the flats to about E. 90th Street. These would be the first two of 12 serial killings committed between Sept. 1935 and Aug. 1938 in or near the Kingsbury Run area. The murderer was never found.

Figuring prominently in the investigation was Cleveland Safety Director, Eliot Ness, who ordered the shantytowns of Kingsbury Run burned to the ground. This ended the string of gruesome murders. 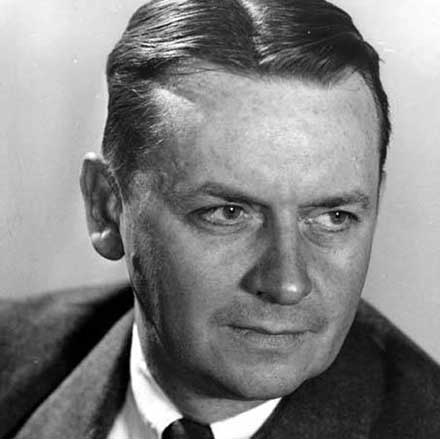 December 1935 — Following his success in bringing down Al Capone in Chicago and his successful turn as the investigator in charge of the Treasury Department's Alcoholic Tax Unit in northern Ohio, Eliot Ness was appointed as Cleveland's Safety Director by Mayor Harold Burton. He was hired to clean up the corruption in the city's scandal-ridden police department and to establish a safe environment in Cleveland. With a contingent of 34 agents under him, much like his “Untouchables” in Chicago, Ness was able to bring 15 officials to trial and garner the resignations of 200 police officers.

As Safety Director, Ness was responsible for burning down the Kingsbury Run shantytowns during the Torso Murders investigation, ending the murderer's crime spree. He also did much to improve traffic control in Cleveland, which, at the time held the record of second-worst American city in traffic-related deaths and injuries. Ness' s contributions to Cleveland's safety were numerous and culminated in his unsuccessful bid to run for Mayor on the Republican ticket in 1947. 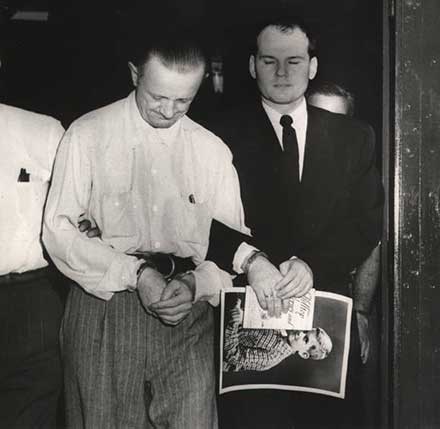 Dr. Samuel Sheppard (right), is led away to a car to begin the trip to the Ohio Penitentiary, 1955.

July 4, 1954 —The beating death of Marilyn Sheppard in the early morning hours at the Bay Village home she shared with her husband, Samuel Sheppard and their son sparked a controversial murder trial that could be considered the O.J. Simpson case of its day.

Police were suspicious of Sheppard's claims that the murder was perpetrated by a bushy-haired man, and he was arrested on July 30th. As a media circus proliferated throughout the trial, the defense was ultimately unable to convince the jury of Sheppard's innocence. On December 21, 1954 Dr. Sheppard was convicted of 2nd degree murder and was sentenced to life in prison.

After appeals, a Supreme Court ruling and a subsequent retrial in 1966, Sam Sheppard was found not guilty.

Danny Greene (aka the Irishman), a major figure in Cleveland racketeering, met his demise when a bomb hidden in a car parked next to him exploded in a parking lot at the Brainard Place office building in Lyndhurst, Ohio on October 6, 1977. Greene had just finished up with a dental appointment to correct a loose filling.

Greene previously survived the bombing of his office and home on Waterloo Road in Collinwood as well as two shooting attempts on his life. During one of the shooting attempts, Greene managed to take out his own weapon and kill the alleged assassin, Michael Frato. Green was tried and acquitted of manslaughter charges at the subsequent trial.

Less than two months after Greene was killed, Ronald "The Crab" Carabbia, Ray Ferritto, James "Jack White" Licavoli, Angleo Lonardo, "Butchie" Cisternino and four others were accused of killing Greene and were indicted on charges including aggravated murder, conspiracy and engaging in organized crime. Ferritto eventually talked to the FBI. As a result, Carabbia and Cisternino were convicted of aggravated murder and aggravated arson but cleared of engaging in organized crime, and Licavoli and Lonardo were acquitted on all charges.

Four years later the U.S. Attorneys were able to take Licavoli, Carabbia and four others into federal court, accusing them of racketeering in Greene's death. All six men were convicted. Angelo Lonardo was convicted of racketeering, drug trafficking and conspiracy the following year.

If you found this page interesting, we suggest you also visit Disasters in Cleveland History.