Models of the Terminal Tower

Writing in The Gamut, Dr. Walter Leedy has said of this model:

A giant plaster model of the area north of Prospect Avenue, costing $8000, was placed on exhibition to be "great assistance to us in moulding public opinion in favor of the Terminals Company." 41 Photographs of the model were used to encourage the passage of the ordinance on the use of the southwest corner of Public Square for the entrance portico, and were used later in obtaining approval of the City Planning Commission and the building permit.

We do not know whether this plaster model still survives anywhere. 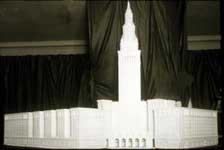 (From the collection of the Shaker Historical Society, Nord Library, Shaker Heights, Ohio.)

This seven-foot, four-inch tall illuminated wooden model (right)was purchased from Don Gress, son of Rudolph Gress, and the dating and provenance of it is based on Mary Strassmeyer's 1980 comment that "The original scale model used by architects who built Cleveland's symbol 50 years ago is in the hobby room of collector Rudolph Gress of Euclid." (Quoted from Mary Strassmeyer's Plain Dealer column of March 31, 1980.)

"By trade, 67-year-old Charles Hlinka is a barber. He also is a musician, an instrument-maker, a fine woodworker and a tailor. In the last three professions, he is completely self-taught.... A six-foot lighted model of the Terminal Tower is another Hlinka project. It took Hlinka 21/2 years to build the model. He made more than 100 trips downtown to check on details." (Quoted from Marie Daerr's Press column of Sept. 2, 1959.)

June, 2003, update: This model has turned up on the market, having remained with the Hlinka family for decades, and apparently was constructed in 1930, instead of 1959, as Marie Daerr's column implies. It is mentioned in an October, 1930, Popular Mechanics article.

August, 2003, update: The Western Reserve Historical Society has obtained this model for their museum collection and confirms that the date 1930 appears right on it. Below are two contemporary photos; the first is a shot of the entire model, posed in front of a panel from the Ferro mural, once in the Terminal and now at the WRHS, and the second a detail of the entry way. Thanks to the WRHS Museum for these shots. 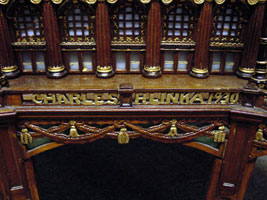 "Adam Karpinski, 55, a self-taught cabinetmaker, stands near his 10-foot-high replica of the Terminal Tower in his living room. It took Karpinski from 1,200 to 1,500 hours to finish the model. He carved 12,000 to 15,000 pieces of spruce and mahogany by hand. The replica has over 3,000 windows made of a special fireproof plastic and there are 36 light bulbs inside for illumination. Karpinski used about 14 pounds of glue. The 'tower' weighs 204 1/2 pounds and comes apart in six main sections which break down to 22 smaller sections." (Cleveland Press Nov. 11, 1975.)

Mary Strassmeyer had this to add about the Karpinski model, in 1980: "Tower Seeker... Roger Laurano wants to buy the Terminal Tower and ship it to New Jersey. He doesn't want the old gray building on Public Square, just the 10-foot high wooden replica that adorns the living room of West Sider Adam Karpinski. Laurano, owner of King David Holding Co. in Orange, N.J., saw a wire service picture of Karpinski's handiwork and called him yesterday with an offer to swap Garden State land worth up to $30,000 for the replica. Karpinski is thinking it over. 'I have a 14-room mansion that is done in mahogany,' Laurano said. 'I thought the Terminal Tower would look better in my foyer than some old medieval suit of armor.' "(Quoted from Mary Strassmeyer's Plain Dealer column of March 31, 1980.)