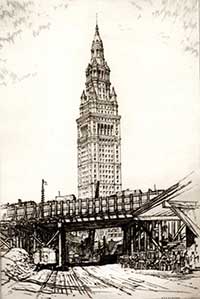 Louis Conrad Rosenberg studied architecture at the Massachusetts Institute of Technology on scholarship awarded by the Architectural Club of Portland, Oregon, his native city. During this time, Rosenberg also won the Technology Traveling Fellowship in Architecture.

Upon completion of his Fellowship travels in Europe, Rosenberg landed a job in New York in 1922 as a designer and draftsman with the firm of York and Sawyer. During this time he produced three etched plates--San Gimignano, The Old Bridge at Sospel, and Moorish Archway Toledo. Not long thereafter Rosenberg enrolled in the School of Engraving at the Royal College of Art in London, to study etching techniques under Malcolm Osborne.

Rosenberg used architectural subjects for his plates. The thousands of sketches he made during his travels throughout Europe and the United States gave him a wealth of material to perfect his etching and engraving style. Rosenberg's style is unmistakable.

Rosenberg returned to America from Europe to accept a commission from the Van Sweringen brothers. The contract called for Rosenberg to produce etchings of the construction of the Cleveland Union Terminal, including sites, demolitions, and buildings. The remuneration for this work was $2000 per plate. Soon after Rosenberg had begun the 23rd plate, well into the Depression the Vans terminated his contract. The prints date from 1927-1930, with one dated as 1905 depicting the original site of where the Cleveland Union Terminal stands today. According to private information later received, the 23rd plate entitled Station from the West (January, 1930), may be found at the University of Oregon.

The Cleveland Union Terminal was designed to be the union passenger station for railroad trains entering Cleveland after 1930. The project included a complex of office buildings, a hotel, department store, and post office; all capped by the Terminal Tower, then the tallest building between New York City and Chicago.