Boasting many fine hospitals and a reputation as a medical innovator, Greater Cleveland can also take pride in the medical facilities that have been provided for its wounded sons and daughters returning home from military service throughout the years. In 1811 the first medical facility for veterans was authorized by the federal government, but for the most part, the direct care and medical needs of veterans were met by the individual states and communities.

In 1837, the U.S. Congress authorized the creation of a network of 26 government-owned hospitals to provide medical care primarily for seamen. The U.S. Marine Hospital, which opened in 1852 on Erie (E. 9th) and Murrison streets in Cleveland, was part of this network. It moved to a new location at E. 124th and Fairhill Rd. in 1929 when the building and site were sold to the Pennsylvania Railroad. After 1953 the U.S. Marine Hospital closed down and was eventually given to the State of Ohio. 1959 it was re-opened as a state psychiatric facility, the Fairhill Psychiatric Hospital.

Following the establishment of the Veterans Administration in 1930, that decade and the next gave rise to two new V.A. medical facilities in the Greater Cleveland area and planted the seeds for the development of a third. The Broadview Veterans Administration Hospital (Blossom Hill), which opened ca. 1940, did double duty as a hospital for highly contagious tuberculosis patients. It closed in 1965 due to declining occupancy. 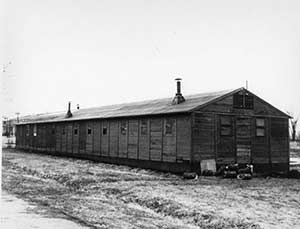 The Crile Hospital in Parma Heights, started out as a temporary army hospital when it opened in 1943. It was built by the U.S. Army and named in honor of Col. George W. Crile Sr., noted surgeon, researcher, and founder of Cleveland Clinic. In 1946, it was acquired by the Veterans Administration and converted into a general medical and surgical hospital for all veterans. Crile Hospital specialized in ophthalmology, the recovery and rehabilitation of paraplegics, and reconstructive hand surgery. During World War II, Crile Hospital also served as barracks for German POWs and, during the Cold War, it was a Nike Missile site.

A plan to build a third facility on East Blvd. near Wade Park on 20 acres acquired by the V.A. in 1948 was bounced around in Congress for more than a decade until it was finally approved in in 1960. When the Wade Park V.A. Hospital opened in 1964, Crile Hospital was vacated and the property was subsequently sold to Cuyahoga County and would become the location of Cuyahoga County College's Western Campus.

In 1956 construction began on a 999-bed, $23 million hospital in Brecksville for the treatment of psychiatric/neurological patients. The Brecksville V.A. Hospital opened in 1961. The 102-acre "campus" on Brecksville Road included 16 buildings and offered such amenities as a swimming pool, a 6-lane bowling alley, a baseball field, a gym, a theater, a chapel, and at one time, a fishing pond. Hospital staff navigated the corridors connecting the buildings in electric carts called widgets. The facility became nationally recognized for its role in pioneering treatment of gambling addiction, substance abuse and Post-Traumatic Stress Disorder.

A decision was made in 2004 to consolidate all patient care at the Stokes Cleveland V.A. Medical Center, saving the V.A. about $23 million per year. In preparation for the consolidation, Stokes Cleveland was renovated and an additional 222-bed tower, administrative office building, a 122-bed homeless domicile and a parking garage were constructed on the campus. A formal dedication of the updated facilities was held on May 16, 2011. The Brecksville facility was decommissioned at a ceremony on September 5, 2011, the 50th anniversary of its opening day.

Collected here are photographs from the Cleveland Press Collection, the Leedy Postcard Collection and the Crile Archives representing the history of government funded and military hospitals of Northeast Ohio. The collection includes current facilities as well as hospitals from the 20th and 19th centuries. 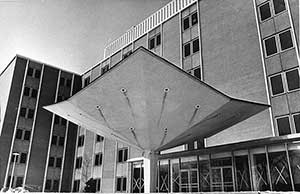 This website is the practicum project of Kent State University Library and Information Science student Gary W. Jamison. He would like to thank everyone at the CSU Special Collections Library including Bill Barrow and Lynn Bycko. Additionally he would like to express appreciation to Joanne Cornelius from the CSU Digital Production Unit and Lauren Felder from Library Systems. He also would like to thank Jennifer Pflaum and Dr. James Banks for providing full access at the Crile Archives. And Mr. Jamison would like to thank his advisor at Kent State, Dr. Wicks for his guidance with the practicum.