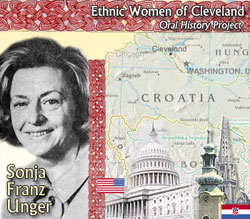 Sonja Franz Unger, born in Zagreb, Croatia, shares her wartime experiences, including her marriage to an American diplomat and their dramatic struggle to escape Tito's Yugoslavia. She and her husand, who was assistant Secretary of the Interior to President Truman, lived in Washington DC with their three children.

Upon moving to Cleveland in 1953, Mrs. Unger became involved in the Nationalities Services Center, using her fluency in half a dozen languages to assist other immigrants. She then became active in politics, serving as the first woman secretary of the Democratic Party of Cuyahoga County, and as delegate to the 1968 convention in Chicago. In 1975 she was selected to receive the Golden Door Award, which is given to honored Americans of foreign birth who have made outstanding contributions to their adopted country.

For Further Reading from the Encyclopedia of Cleveland History

Digitizing of the transcripts and audio files and preparation of the html version of the transcripts was performed by Achala Wali, as part of her practicum project in the School of Library and Information Science, Kent State University, during the spring term, 2005. She performed this practicum in Special Collections, Cleveland State University Library.