Irish Americans of Cleveland is one of a series of websites developed or planned by Cleveland State University Library to explore the ethnic influence that helped shape the history and development of Cleveland. 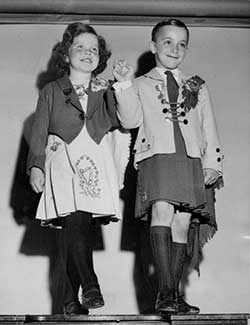 What does this site contain?

Irish Americans of Cleveland contains over 200 images selected from the Special Collections Department at Cleveland State University Library. We've also provided a sketch of Irish American life with excerpts from The Irish Americans and Their Communities of Cleveland by Nelson J. Callahan and William F. Hickey. Links to websites of contemporary Irish American organizations and culture will help acquaint you with Irish Americans today. And finally, to help you grab a piece of the past, we've selected artifacts found in an archaeological dig at the "Angle", or the old Irishtown Bend neighborhood.

To be included in this site, an individual had to be either born or raised in the greater Cleveland area or have lived a significant part of his/her live in the region. We have attempted to include individuals who made a significant contribution beyond their own personal and family life to the history and development of Cleveland. Scenes depicted in the photographs should help illustrate the cultural life of Irish Americans during different phases of adaptation to life in the United States.

All the photographs in the Irish Americans of Cleveland are from the Cleveland Press Archives or the Cleveland Union Terminal Collection located in the Special Collections Department of the Cleveland State University Library. The photos included in this site focus on Irish individuals born and/or raised for a large portion of their life in the Cleveland vicinity and who have made a significant contribution beyond their own personal and family life to the history and development of Cleveland. The scenic photographs add to the visual understanding of what Cleveland physically looked like during the different phases of the Irish immigrants' adaptation to life in the United States. From the religious institutions that added stability to the immigrant's life to the bridges, factories, and canals that provided work for them - the photographs bring to life the 'Irish' Cleveland of yesteryear.

This site relies heavily on three sources of information:

We welcome not only your comments about this site but also additional information about any of the persons included in Irish Americans in Cleveland, including information about accomplishments after 1982 when the Press ceased publication. Corrections of information are also welcome. The University Library invites the donation of photos for use on this site. They could be of individuals already included or of additional persons to be added. The photographs could be added to our permanent collection or, if requested, returned to the owner after digitization for the web site. Contact us.