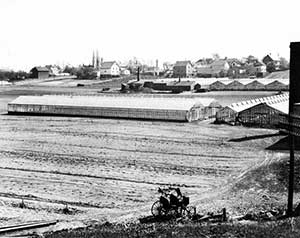 On the commercial front, in 1937 greater Cleveland was home to America’s largest concentration of farming acreage (225 acres) under glass mostly in the Schaaf Road/Old Brooklyn and Olmsted Falls areas. (Rose, 1950)  In 1887, T. W. James built a greenhouse on Schaaf Road and in 1892, Fred Witthuhn opened a greenhouse at Pearl and Dover Streets that was later moved to the Schaaf Road area. The Witthuhn family managed the operation that grew into one of the largest farms in the area.  One of the reasons for the great success of greenhouse gardening in Cleveland was the development and use of innovative farming and business practices. (Rose, 1950) 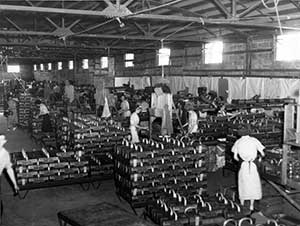 Martin Ruetenik, son of a German immigrant, developed a greenhouse design that was the adopted as the standard for commercial greenhouse structures. Other farming innovations included a special water supply system that incorporated a dam and wind-power along with storage tanks.  An early adapter of truck farming, Ruetenik’s fleet of Model T Ford trucks distributed fresh produce throughout the region and even into adjoining states of Pennsylvania and Indiana. In 1901 he created an early profit-sharing plan with employees to give them a share in the business. The plan generated interest and inquiries from companies in other lines of business at that time. At one time there were four "Ruetenik Gardens" in Ohio and located in Cleveland, North Bloomfield/Orwell, Vermillion and Wooster, as chronicled in Remembering Ruetenik Gardens and The Rise and Fall of the Cleveland Greenhouse Industry.