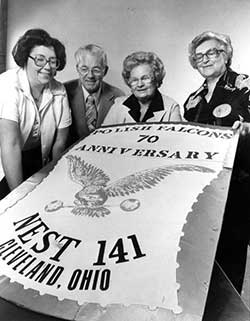 Bertha (Struzynski) Modrzynski grew up as a first generation American in Cleveland, Ohio. Born to Polish parents in 1912, she speaks about growing up in the Poznan neighborhood around East 82nd and Pulaski near St. Casimir's Church. Mrs. Modrzynski was a machinist who started working when World War II broke out and worked for Ohio Crankshaft and then Cleveland Pneumatic Tool until 1967.

Bertha was very involved in Polish heritage organizations and tells about her involvement in the Polish Falcons, Alliance of Poles, Polish Constitution Day, and the Polish American Congress. She was also involved in the Immaculate Heart of Mary Church on Lansing Avenue in Cleveland, Ohio. Mrs. Modrzynski recounts swearing Dennis Kucinich in as mayor of Cleveland and Pope John Paul's visit to Cleveland while he was a Cardinal in 1969.