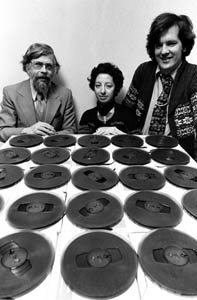 The Greater Cleveland Ethnographic Museum recorded music as part of its Balkan Slavic Music Project in order to preserve the traditions of immigrants in their new setting. They recorded the live performances of folk musicans playing traditional music from Bulgaria, Macedonia, Croatia, and Serbia, as it was played in its natural setting throughout the American Midwest.

Of these tapes, tamburitza music makes up the majority of the music with the remainder of the recordings include singing (such as singing from Christmas and Easter services at St. Sava's Serbian Cathedral and St. Nicholas Croatian Catholic Church), Macedonian-Bulgarian clarinet orchestras (based on clarinet and drum) and interviews with Macedonian musician Paul Vangeloff discussing the style of music, and recordings of native instruments. Excerpts from the tapes were used to produce the UNESCO award winning album Nova Domovina - A New Homeland which can be heard online.

The collection of tamburitza music contains live recordings of concerts of Cleveland youth tamburitza orchestras ("junior tammies"), such as the Cleveland Junior Tamburitzans and the Zagreb Junior Tamburitzans, that could be digitized. These were youth groups, such as Zivili of Columbus and the Akron Tamburitzans, that also took trips to Yugoslavia. There are also cassette recordings of the former Plain Dealer President Alex Machaskee and of his tambura group, the Continental Strings.

As mentioned previously, tamburitza music makes up the major part of the collection of reel to reel tapes captured from the field recordings. The tambura (or tamburitza, the affectionate diminutive of the word) is the Croatian national instrument. Most literally, it refers to any one of a number of long necked fretted string instruments, resembling a mandolin. It was brought to the Balkan peninsula by the Turks and their vassals, mainly Roma (Gypsies), beginning in the 16th Century. Tamburas are played by both small combos and large orchestras. The small groups contain at least four instruments: the small lead prima or bisernica, the alto brac or basprim, the tenor cello, the chordal bugarija or kontra, and the large fretted bas or berde. It is not unusual to find other instruments, most commonly violin and accordion, but some modern groups include electric instruments and drums.

The spreading of the tamburitza ensembles during the period of the Austro-Hungarian Empire to the Germanized Slavic middle classes of the Croatian and Serbian provinces corresponded with a large-scale pan-Slavic national awakening, when the Croatian and Serbian bourgeoisie was "discovering its roots". Playing folk music in small ensembles became a symbol of national identity for Balkan Slavic countries. Tamburitza ensembles first made their appearance in the Steelton, Pennsylvania area in the 1890s. The first known American ensemble was the Hoffer Family Tamburitza Orchestra. Many players learned the instruments from some of the early tamburitza teachers active in North America. The culture of making and repairing the instruments is still practiced today by such repairmen as Janos Kusnir of Berea, Ohio.