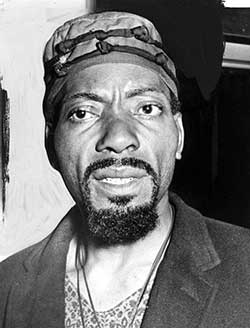 Fred Ahmed Evans was born Fred Allen Evans in Greensville, South Carolina, in 1931 and moved with his family to Cleveland later in the decade. Dropping out of school, he enlisted in the Army in 1948 and earned six medals for meritorious service while serving in the Korean Conflict, and was honorably discharged in 1952.

In 1954, Evans re-enlisted in the Army, but his behavior had become an issue. He was court-marshaled later that year for striking a superior officer and served seven months in a military prison. Evans claimed that he suffered from headaches, blackouts, and recurring partial paralysis as a result of his injuries sustained in Korea. Army physicians diagnosed him with psychomotor epilepsy and a paranoid-type personality.1 Evans was discharged in 1955 and he returned to Cleveland.2

Evans' influence in the Cleveland neighborhood of Glenville grew steadily in the late 1960s in part because of his community involvement and activism. He became a vocal leader within the local black militant movement. He opened the Afro Culture Shop and Bookstore to cater to the growing interest in African culture. Young African Americans used his store as a neighborhood meeting place. During 1967, Evans' store was closed down by police three separate times for sanitary code violations. Evans was able to secure a $10,300 grant through Cleveland: Now! and used the money to fix up a dilapidated and abandoned store on Hough Avenue. Evans intended to open an African culture shop at the location. After cleaning up the store the white landlord prohibited Evans from using it how he had planned.3

Cleveland race relations became increasingly strained during the 1960s. In the summer of 1966, riots broke out in the Hough neighborhood. An incident at a local bar triggered seven days of rioting that left four African-Americans dead. National Guard troops were called to restore peace. The Hough riots left many Clevelanders with the belief that racial tensions and riots would continue unabated.4

The assassination of Dr. Martin Luther King Jr. on April 4, 1968 further increased Fred Ahmed Evans' distrust of the white establishment. Soon after Dr. King's death, reports of black nationalists stashing firearms at 12312 Auburndale Avenue were reported to the Cleveland police. This address was believed to be Fred Ahmed Evans' home. Police began monitoring Evans' residence in order to corroborate the reports. Despite suspicions, police lacked probable cause to obtain a search warrant for Evans' home.5

Because they could not gain entry to search inside the residence, police began patrolling the home to monitor the situation. Despite Cleveland Police Inspector Lewis Coffey's advice for roving patrols, the police actually established stationary surveillance positions with unmarked cars on either side of 12312 Auburndale. Evans noticed the cars quickly and found the surveillance threatening, and expressed his dismay to Councilman George Forbes and former Browns player Walter Beach. The men assured Evans they would do what they could to curtail the monitoring.6