Following Fred Ahmed Evans' convictions for murder, his attorneys filed a series of motions and appeals in order to reverse the outcome. The Evans team called for a new trial when it claimed that State witness Walter B. Washington committed perjury when he told the court he had never previously testified in court. Court records indicated Washington had testified in a juvenile court trial in September 1968. Judge McMonagle found no merit to the argument.1

The Eighth District Court of Appeals granted Evans a stay of execution pending disposition of his appeal; he was originally scheduled to be executed on September 22, 1969.2 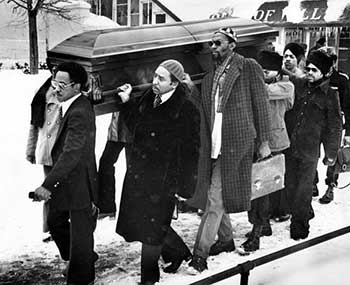 The defense filed a motion for a new trial on the basis of new evidence that may have indicated one of the prosecution's witnesses caused a prejudicial verdict. Judge McMonagle called a hearing on the issue at which attorneys Tolliver and Fleming attempted to show that State witness Curtin Martin lied about his relationship with Evans and Phillip Carter, the former director of the Cleveland chapter of the Congress of Racial Equality (CORE), and thus corrupted the entire proceeding. Judge McMonagle ruled against the motion, indicating it was filed too late and any evidence Evans possessed was not sufficient for a new trial.3

The Court of Appeals declined to overturn Evans conviction. The Supreme Court of Ohio affirmed the appeals court decision.4