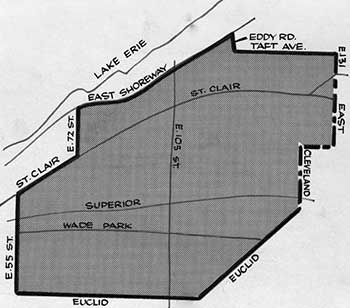 On July 23, 1968, two police officers received reports of an apparently abandoned car on Beulah Avenue between East 123rd Street and Lakeview Avenue. They radioed for a tow truck to remove the vehicle. By the time tow truck arrived, dusk had fallen, making the tow truck operators' uniforms appear similar to those of police officers in the fading sunlight. Cleveland area residents often assumed tow truck operators were in fact policemen in the late 1960s.1

According to witness William McMillan, one of the tow truck operators on the scene reported that while exiting his truck, he was shot by a man wielding a shotgun from the side of a house on Lakeside Avenue. McMillan tried to take cover near his truck but was shot in the side by "another sniper…firing from the bushes just in front of the truck." McMillan later testified that he was shot a third time while running away from the shooter. McMillan identified the man as Fred Ahmed Evans.2 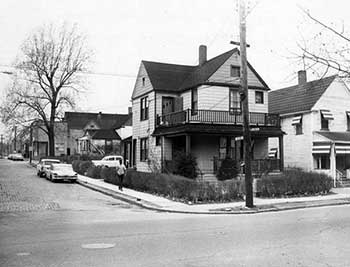 According to Patrolman James O'Malley's court testimony, one of the officers in the unmarked police car, a black man came out of 12312 Auburndale, crossed the street and aimed a rifle at the surveillance car.3 Alarmed, both surveillance cars left the area, but were pursued, and fired on by black militants. Patrolmen Thomas Gerrity and Thomas Horgan became aware of the situation via police radio and saw McMillan being chased down the street by a black man. The patrolmen's vehicle was hit by gun fire, and the police returned fire at the two snipers hiding behind the tow truck. The shootout escalated as more police arrived on the scene. According to Lieutenant Burt Miller, snipers fired at police from two corners of Lakeview and Beulah.4

Conflicting reports exist regarding when the police and tow truck drivers arrived. The sequence is not certain. Evans did not believe his group ambushed police, rather he concluded that "We were ambushed, not the police." According to Evans, he was walking on Lakeview Avenue when he heard the first shot. He saw the tow truck operator running along Beulah. This was followed by what Evans believed was a submachine gun blast that killed Amir Iber Katir, one of his followers. Evans' testimony was consistent with several reports that the first person killed on the scene was a black nationalist.5

During the course of the shootout, Patrolman Louis Golonka, Patrolman Willard Wolff, Lt. Leroy Jones, and civilian James Chapman were killed. Several of Evans' followers also died. By early morning on July 24, 1968, the initial chaos subsided. Police received a message on their radios: "1384 Lakeview: front door open, man wants to give himself up, wants [to surrender to] Negro policemen." Three white officers responded; as they approached the home, Fred Ahmed Evans emerged.6 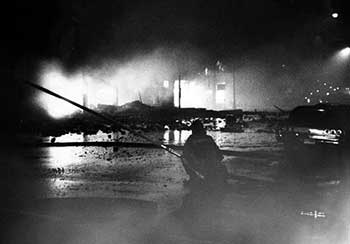 Battling fires during Glenville riots of 1968.

Evans asked the police "How are my people?" When police told Evans that three or more of his group were killed, Evans replied "they died for a worthy cause." He told the officers "If my carbine hadn't jammed I would have killed you three [officers]." One of the officers asked why Evans started the incident, to which Evans is said to have commented, "You police have bothered us for too long."7

The actual sequence of events on July 23, 1968, may never be fully known or understood. Underlying racial tensions helped fuel what was one of the worst riots in the United States at that time. In less than two hours, seven people died and fifteen were wounded. In the following five days, the Glenville neighborhood was set ablaze by arsonists and people looted nearby businesses.8

1Louis H. Masotti & Jerome R. Corsi, A Staff Report to the National Commission on the Prevention of Violence, Shoot-Out in Cleveland-Black Militants and the Police: July 23, 1968 (1969). pg. 43.