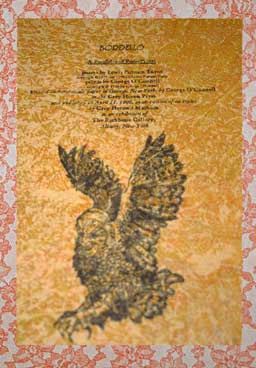 A page from Bordello

Bordello is a portfolio consisting of a series of twenty-three "poemprints": prints crafted by George O'Connell to illustrate the poems of Lewis Turco.

Each of the poems in the series is a monologue in the voice of a man who had frequented a bordello. As Turco pointed out in a statement about the poems, there had been various literary works in which "'fallen women' [had] figured prominently, but I noticed that in most of them not much was said about the men who had helped them to fall. I deteremined to investigate some of the reasons why certain sorts of men would use a bordello." Until the publication of Bordello, these poems had never before been printed as a complete series in a separate edition, although most of the poems had appeared in earlier collections of poems by Turco.

"I re-read the poems again and again. . . .I finished a drawing I called 'Conversation with Goya,' and that set the direction the prints would take . . . I used masks of symbols of hiding, of pretense and artifice, and mutant hawks as raptors. The result of that effort is before you."

Collaborators on various projects since 1981, Turco and O'Connell worked together to typeset the poems, some by computer, some by hand. The prints were made by a variety of methods, including linocut engraving, color relief, and stone lithograph.