More About Lewis Turco and the Poetry Center 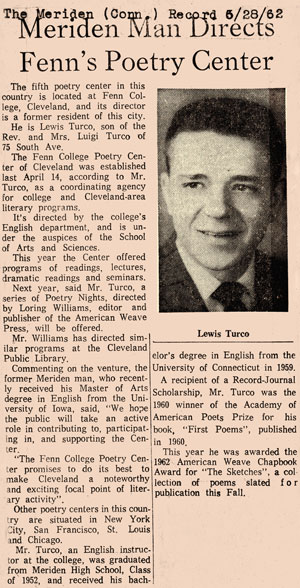 From the Poetry Center Scrapbook

In the early 1960s, Turco began his teaching career in the English Department of Fenn College, which later became Cleveland State University. He founded the college's Poetry Center and acted as its director until 1964. From 1964 to 1965, he was an assistant professor at Hillsdale College in Michigan. He then moved on to the State University of New York at Oswego, where he founded the school's Writing Arts program. He served as the program director until his retirement in 1996.

On April 14, 1962, Turco announced the founding of the Poetry Center at Fenn College. Over the next two years, Turco would propel the center to achieve great success and a lasting legacy in the Cleveland community.

In those two years, the poetry center would attract such prominent authors as William Golding, author of Lord of the Flies; John Crowe Ransom, critic and founder of the Kenyon Review; and X. J. Kennedy, editor of the Paris Review.

The center also demonstrated its dedication to sponsoring and promoting local Cleveland literature programs, and played host to numerous Ohio programs in writing and literature, including the Ohio Versewriters' Conference.

The Fenn College Poetry Center was the fifth of its kind in the United States. Other centers had been established during previous decades in New York, San Francisco, St. Louis, and Chicago. Their histories are found by following the links below:

Origins, Legacy and Founding of the Poetry Center:

The origins of the poetry center are rooted in a program of contemporary poetry begun by the Fenn English Department in 1961. The series included visits and readings by authors and poets, including the Pulitzer Prize-winning author W.D. Snodgrass. Turco and audio technician Dave French made tape recordings of the poets in attendance, calling these recordings the Fenn Series of Contemporary Authors. The foundation of the Poetry Center, in essence, had already begun with the contemporary poetry program and the Contemporary Author Series, but in 1962, the Poetry Center was made official.

Initially the Fenn Poetry Center was described as a "coordinating agency for college and local literary programs" (The Fenn Cauldron, April 23, 1962). Over the next two years the center expanded its mission to include open mic nights, readings, lectures, poetry forums, audio studios, and other programs. Despite a meager first-year budget of $100, the center was able to procure the talents of many prominent authors and attract the attention of the poetry community in Ohio and across the nation.

Thanks to the generosity of its patrons, the zeal of its director, and the support and attention of the local media and the Department of English at Cleveland State University, the initial success of the Poetry Center was assured. In 1963, in recognition of its success, the Poetry Center received a shared first prize award from the Poetry Pilot, a publication of the Academy of American Poets. This award was given only to centers that showed success in areas where there was "evidence of local approval, how poetry was carried to the community, how audiences were enlarged and informed, quality of the poetry, and caliber of the poets" (Fenn College Evening Division, Vol. 17, no. 1).

Today, the Poetry Center still operates out of the English Department of Cleveland State University and continues its mission of promoting the art and craft of poetry at the University and throughout the Cleveland community.