Scoping Out the Competition 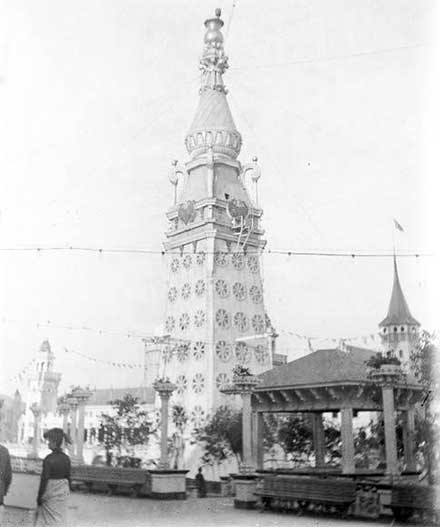 The Electric Tower at Luna Park on Coney Island, 1903.

Not so much competition as industry standard, Coney Island in Brooklyn, New York was the measuring stick by which all amusement parks in the United States compared themselves in the early 20th century. In its heydey, Coney Island was the site of four amusement parks, Sea Lion Park, which opened in 1985, Steeplechase Park (1897), Luna Park (1903),and Dreamland (1904). If you evaluated attendance records for Coney Island in 1909 and those of Disneyland, Disneyworld, and Epcot combined in 1989 and adjusted for increase in overall population, statistics would show that Americans visited Coney Island 20% more frequently.1

It only made good business sense for amusement park owners across the nation to keep their eyes on Coney Island for new innovations, attractions, and rides, and the Humphreys of Cleveland were no exception. Or so we can assume from the many images of Coney Island and other amusement parks included in the Humphrey Glass Negative Collection. 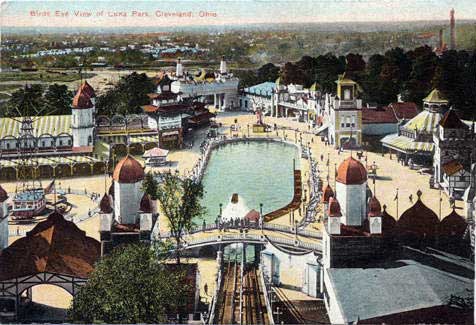 The desire to duplicate Coney Island's success was evidenced by the appearance of ''copycat" amusement parks across the world, most notably the chain of "Luna Parks" established by Frederick Ingersoll from 1904 through 1912. The Luna Park in Cleveland opened in 1905 and was located in a 35-acre area bounded by Woodland Ave., Woodhill, Mt. Carmel, and E. 110th St., about 8 miles away from Euclid Beach. Providing strong competition for Euclid Beach, it was known for its "Oriental" architecture, electric lights and the availability of beer. The outlawing of liquor during Prohibition seriously hurt business for Luna Park, but the nail in the coffin was the Great Depression of 1929.2 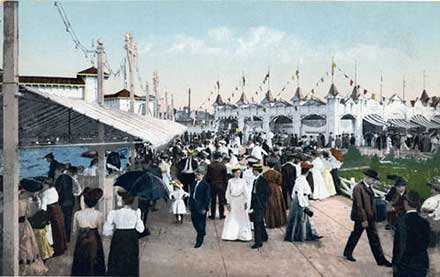 General View of "White City on the Lake", Cleveland, Ohio.

Literally, the closest competition for Euclid Beach Park was White City, located only a mile away at Lake Shore Blvd. and E. 140th St. It was opened in 1900 and was operated by the former owner of Euclid Beach Park, William R. White, Sr., who, unlike the Humphreys, charged an admission fee. A fire in 1906 followed by damaging gale a year later forced the park to close.3

Other early local competitors of Euclid Beach included Forest City, the first documented amusement park in the Cleveland area, which ran from about 1883 until the mid-1920s, and Puritas Springs Park on the west side, which ran from 1898 through 1958.

As the population became more mobile and the focus shifted to amusement parks that were more like vacation resorts, Disneyland replaced Coney Island as standard-bearer, and parks that could accommodate this paradigm shift, like Cedar Point and Geauga Lake, were able to endure past the 1970s. With other factors contributing, Euclid Beach could no longer keep up with the competition and closed on September 28, 1969.4