Frederick Post and David Zeisberger, Moravian missionaries from Pennsylvania, and pioneers, Conrad Weiser, John Heckewelder and Ebenezer Zane (Zahn), were some of the first Germans to explore and establish settlements in Ohio back in the late 18th century. 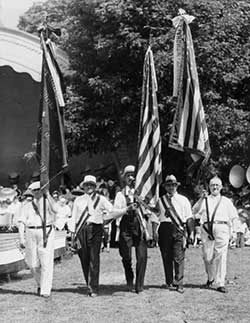 German immigrants escaping political oppression, religious persecution, and economic depression found the route to Cleveland more acessible upon the opening of the Ohio Canal in 1833 and later with the railroads in 1848-49. Many of them settled on farms in Newburgh, Independence, and Parma.

The succeding decades saw the German population in Cleveland thrive as public servants, merchants, bankers, businessmen, and craftsmen. Institutions of higher learning, such as German Wallace College (1863), and houses of worship, such as the Zion Evangelical Lutheran Church (1847), were established. The arts emerged and buildings designed by local German American architects dotted the Cleveland landscape. Germans remained the largest group arriving in the city on an annual basis until the mid-1890s.

According to the 2000 U.S. Census Factsheet for Cleveland, Ohio, German Americans in Cleveland number 44,164, approximately 10% of the population and are one of the largest ethnic groups in Greater Cleveland.

For more information about German Americans' contributions to Cleveland, explore the following topics:

For a general overview of German Americans in Cleveland, we suggest: